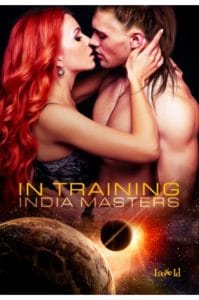 er’s In Training was just re-released by Loose Id after revision and editing. It’s short at 58 pages, but look at that cover.

Description: Elecia is a man’s world and women are expected to toe the line. It’s been that way for millennia and no one seems to be interested in changing things, except Athena Rochan. While her father was away at war, Athena ran Rochan Shipping, increasing profits, improving their fleet, and garnering new contracts planetwide. Her reward? Her father, the general, hires Barik Lugaren, a barbarian from the neighboring planet, to train her in the ways of Elecian womanhood. She must submit to him body and soul or be disowned and kept from seeing her mother ever again.

In Athena’s mind, Elician laws are barbaric, forcing women to submit to every whim of their husbands, allowing husbands to physically punish a disobedient wife. Worse still, is the practice of the father’s choosing husbands for their daughters and husbands forcing their wives to sexually submit to honored guests and business associates, even multiple partners. Disgusting. How could her father do such a thing to his only child? Athena is not happy. While she will submit to the training to keep her ties to her mother, she will challenge Barik Lugaren’s authority every step of the way.

Download a sample or read an excerpt at Loose Id.