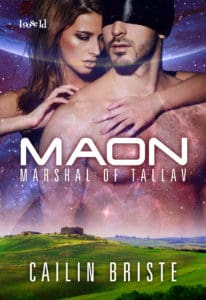 Maon fiddled with the glass in his hand. From his perch at the end of the space-station bar where he sat waiting for Shane to meet him, he could observe everyone entering the companionway from the private ship docks on this side of the station. The usual eye candy passed him, rushing to explore as much as they could of the pleasures that awaited them on Beta Tau. Shane was due in on the Adrasteia. Maon didn’t envy Shane much, but the Adrasteia was one sweet little craft.

“Yeah. But no alcohol. Something fruity.”

When the bartender returned with his drink, Maon noticed a Tallavan woman heading his way. He should know her name, but it wasn’t coming to him. Definitely a prude. Wearing some misshapen, baggy sack of a dress. Nice legs, but they’d look better in heels rather than the flats she wore. Shirley. That’s who she was. He’d heard something about her taking over her mother’s fashion house. If that was her sense of style, they’d be out of business soon.

He eyed her when she passed him, and their gazes met for a moment. He acknowledged her with a smirk. The portfolio she carried slipped, and she struggled to keep it from falling, her long sable hair snagging in the strap. Her head remained down while she swept from view. Maon chuckled.

“Are you harassing passersby again?”

“Shane!” Maon stood and grasped his friend’s outstretched hand. “I can’t help being devastatingly good-looking. The bane of my existence. Females dropping at my feet.”

“Some bane. You up for fun?” Shane focused on the people walking past the open bar. “Randolph told me he’s got the subs I need and plans for you. You’re not gonna let him put you in predicament bondage again?” He centered his bright blue gaze on Maon, one eyebrow arched.

Maon grinned. “He tries. Never wins. I’m made of steel.”

“But with brains of mush.”

“You’re jealous.” Maon winked at a pretty girl passing by, letting his tousled good looks and crooked smile work their magic. One thing Beta Tau had in abundance—women, all shapes and sizes ready to have fun. And he was here to make their dreams come true.

Shane glanced at Maon and looked away in disdain. “What? Jealous! You get one girl as a prize. I’ve already got eight waiting on me.”

“What do you do with them? Tie ’em up.” Maon shook his head and paid the bartender. Both men headed toward the lift to take them to the shuttle docks. Shane seemed, as usual, oblivious to the undisguised interest the two handsome Tallavan marshals received while they strode down the companionway. Maon noticed, enjoying the attention, a slight exaggeration to his swagger while he winked and appreciated the varied reactions to his flirting. Yes, this trip was what he needed after a long stint of ferrying prisoners around the sector.

Having the owner of the top kink club on Beta Tau as one of your best friends was a definite benefit. The twins Randolph had offered as prizes on Maon’s last vacation had fueled his fantasy life for months, fantasies Maon had amped up by adding in a hot Domme to put the girls through their paces. Randolph never set him up with a Domme. The prizes for winning Randolph’s challenges were always subs. Not that many Dommes were willing to offer a session as a prize. Randolph said he’d never found the right one for Maon. Maybe this time.

Maon’s one slim thread of hope for a long-term relationship was to find a Domme who could accept him as the switch he was and keep him in line. He didn’t know which was harder, but combined, his requirements made that thread whisper thin. Which was why he’d stopped worrying about it. If you can’t have apple cobbler, eat the peach pie. He was dedicated to peach pie.

Shane interrupted Maon’s reverie. “You don’t have to accept Randolph’s challenges. They’re only going to get worse. He’s a sadist. He likes rigging you up and seeing you suffer. One of you has to say it’s time to stop.”

Maon pressed his lips together. “That won’t be me. He knows I won’t step back, so he’ll have to be the one to call it quits. Talk to him. Not me.”

“No. He hasn’t done me permanent damage, and he won’t. Drop it. We’re here to have fun, not fight.”

Shane sighed, nodding. “I am going to talk to him.”

“Good luck with that.”

Both men showed their badges to bypass the entry control line and obtain shuttle passes. The attendant directed them to the last two open seats at the back of the shuttle. It wasn’t until Maon neared the last row that he noticed the Tallavan frump he’d spotted from the bar. Up close, she was quite pretty. Why the hell was she hiding in those awful clothes? He winked and flashed his panty-melting half smile and waited for her reaction. She focused her gaze on her lap, pretending to ignore him, but Maon could tell she was affected because of the muscle that twitched in her jaw. He annoyed her. Time to stop then. He didn’t like making women angry. He slid into the window seat and dropped her from his mind.