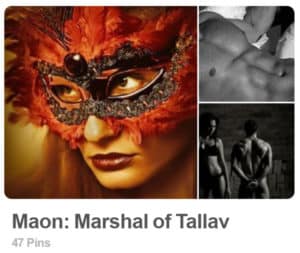 The mind’s eye is better at forming an image of characters and places in novels. But for those who like a hint at what the author intended (no actual person or place can really do that) the images posted on the Maon: Marshal of Tallav Pinterest board are as close as I could come. You’ll see who I imagine the main characters look like, but also Beta Tau from space and the Beta Tau space station.

A pleasure planet shouldn’t be limited to views from orbit, so you’ll find pictures of the domes, an inside view of the Whip Hand, Randolph’s BDSM club, and Randolph’s favorite whip. Pyantha, a plant similar to hemp in all its uses, has a major role in the story, so I found images of the plant, pyantha yarn, and the famous Audrina pyantha shawls. The pic of Shane’s space ship isn’t quite right. I’ll keep looking. Discover the beauty of exotic Qingdao. For those who haven’t read the book, I won’t reveal the importance of Nehru jackets, but I’ve posted several images of them from the sixties.

Best of all are the pics that make up two of Selina Shirley’s signature outfits in the book, her Domme costume and her flaming evening gown. That’s enough hints about elements of the book. You’ll just have to read Maon: Marshal of Tallav to discover how each fits into the story.

Last but not least since this book involves a Domme, I’ve added several drool worthy pics of handsome, built men submitting to the women in their life. They’re at the top. I don’t blame you if you have to spend a minute or ten on those pics alone.