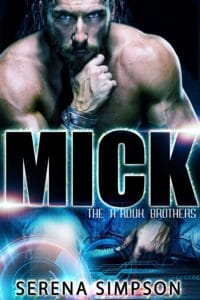 Jaz is a clone. Mick is an A’rouk. Together they are explosive. Serena Simpson is at CailinBriste.com to make you scream a passionate squee with an excerpt from Mick: the A’rouk Brothers. Let us know your thoughts on how passionate squee worthy you think this excerpt is by leaving a comment below.

A Passionate Squee Excerpt from Mick: the A’rouk Brothers by Serena Simpson:

“It’s beautiful in here.” She walked over to one of the doors to see the bathroom revealed behind it. A sly smile appeared.

She gave him a wink and began to take off her clothes, dropping a piece at a time and leaving a trail to the bathroom. When he walked in he was naked and the tub was half full of scented water.

“I’m going to smell like a woman.” His voice held a smile as he hugged her from behind. She could feel his thick erection pressed against her ass as he moved her hair to the side and kissed her neck.

“Maybe we should take that bath later.”

“Maybe or maybe you should sit on the rim of the tub.” He looked at the tub then looked at her before going to sit, spreading his legs wide.

He called to her. She needed to touch him, reaffirm the connection between them. She missed him. Her mind was already slipping in and out of his. She didn’t know how they were going to do it, but they had to find a way to be together more than a day or two before The Darkness or her life traumas pulled them apart again.

For a minute, the fact that the Patron or the Clone Council could find her since she was no longer in the air tightened her throat before she shook off everything except thoughts of Mick.

Mick looked at her and saw the longing in her eyes, but he needed her to know him, see him for both the good and the bad that lived inside of him. He allowed his body to change; it went through several different shifts showing her who he was and what he could become. There were no secrets, no hiding. If she wanted him, then she would know what she was getting.

He looked at her with eyes going a dark shade of blue. She could see the fear of rejection in them. She didn’t care that his body could change forms just like he didn’t care she was a clone. He was beautiful in every form he took and deadly but it didn’t matter because no matter what he looked like on the outside on the inside he was still Mick, her mate.

She walked up to him and leaned over kissing him deeply before she sank to her knees.

“I don’t care what form you wear, Mick, you’re still you and that’s what I’m attracted to, I like who you are on the inside the person you keep hidden from the world.”

“Jaz mine,” his voice came out as a croak as she took her hand and slid it around the tip of his cock.

A drop of pre-cum beaded up; she took her tongue and licked it allowing the small burst of flavor to take over her taste buds. She let out a moan before she licked the head of his cock again.

She took his cock in her mouth stopping his words.

“I don’t have to what? Touch you, lick you, taste you?” Her hand wrapped around his stiff erection slowly pulling up on it.

A gasp came from his lips making her smile. “I used to dream about stuff like this; then shame would send me to the bathroom to scrub at my skin since I couldn’t scrub my mind clean.”

She placed her mouth over his cock and sucked him, allowing her head to move up and down making him slick with her mouth.

She took him in a little further, a little deeper as her cheeks puffed out. She worked harder, wanting him to spill in her mouth.

A deep moan came from him as his hips started thrusting up pushing his cock deeper inside of her mouth. That’s it; she wanted to taste him. She could feel his legs shake. He allowed her to feel the pleasure that was coursing through his body, all coming from her mouth on his cock. The incredible feel of her on his cock making him shake. Then he was setting her away from him, breathing deeply as he got himself back under control.

Why did he stop? Didn’t he want her that way?

“You’re not dirty, Jaz mine.” He stood, and bent over to let the water out the tub. “You don’t need to scrub at your skin for an atonement of a sin you never committed.” He watched as the water spiraled down the drain.

“You can place your sexy mouth on me anytime, but I won’t be spilling in it until you know that it’s not a sin, that you’re not doing something wrong. Until you are so sure about who you are you can shout it to the universe.”

He looked down. “So I am. I probably should take care of that.”

He reached down and grabbed his erection in his hand. The muscles in his arm bunched and her eyes widened. Her tongue peeked out between her lips as her breaths came out harsher. He pulled on his cock and her vagina throbbed. She bit her bottom lip to keep from crying out as he moistened his hand and started pumping in earnest.

His eyes were on her, the blue expanding almost as if she could fall into them. Her hips moved just a little keeping up with his movements.  Faster, he went faster. She could see his nostrils flare as he gave one last hard pump of his cock and his seed shot out hitting her on her belly.

Her frantic fingers slid down her body looking for relief. Mick picked her up and placed her over his thick cock before he dropped her on it. A squeal of pure bliss left her lips even as she tried to move, to rock on him. He walked her to the wall and held her tightly as he began to pump into her.

She screamed his name even as she wrapped her legs around his waist. She begged for him to move faster, harder. She needed what only her mate could give her.

Mick’s control slipped. He couldn’t control the thrust, couldn’t make it easy and good. He demanded, he took, and still her high keening sounds were coming. She’d be sore when he finished loving her, but he couldn’t make himself stop, he needed this. This oneness. Her body shook violently in his arms when she came around him, squeezing so hard that she took him with her. His knees started to give out. He held her tighter and moved her to the bed before they both fell.

Serena is the mother of one teenager and a new cat. The teens no trouble but the cat wants to be petted all the time especially when I’m writing.

I love aliens and spent years watching Star Trek in reruns. I also screamed when my dad took me to see Alien and that monster jumped out of the guy’s stomach.

I love creating new worlds and aliens as well as humans to inhabit them and maybe I believe that there is life on other planets. Whether there is or isn’t what all life needs in love and I enjoy putting writing about it.

In my books, you will find Aliens, shifters, dragons all hot males who want only one thing a woman to love.