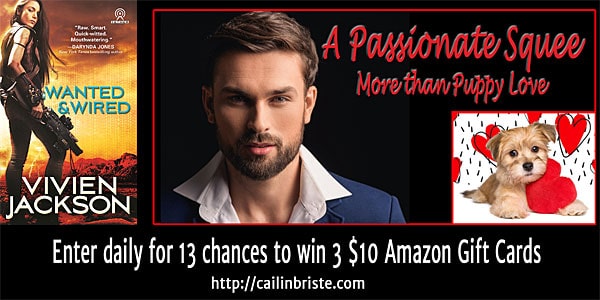 Overheating with passion can be a problem if your a near-future cybernetically altered mind-reading super genius. Heron Farad is running a full four degrees hotter than normal with dangerous desire. Day 5 with Vivien Jackson is a sci-fi romance treat.

Take it away Vivien Jackson!

Hullo! I’m Viv, and when I was seven a terrible thing was done to me, which I will now do unto you.

After seeing The Empire Strikes Back and deep in the throes of childhood fangirlish wonderment, I confessed to my older sister my dearest, secretest wish: to grow up and marry Han Solo. After hearing my confession, my superior older sister turned to me and, as sisters are wont to do, smacked me down. Hard. 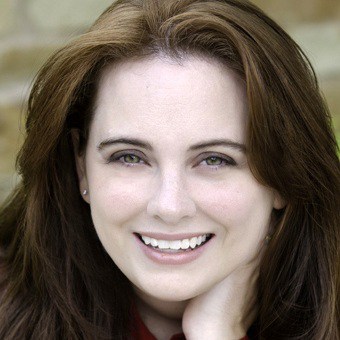 See, as she told me, Han Solo is not what we call “real.”

(Sorry if that’s a spoiler. I know. I took it pretty hard, too. Would you like a tissue? Vodka?)

Over the subsequent decades and hoping to disprove her, I made a study of realness, and do you know what I found out? Captain Mal “Tightpants” Reynolds also is not real. Neither are John Crichton, the Tenth Doctor, or Aragorn son of Arathorn. (Sure you don’t want the vodka? That initial surge of disappointment can be rough, I know.)

So, as snarky writerly geek fangirl types with a healthy grasp of comma usage are wont to do, I made up my own version of real.

Exhibit One’s name is Heron Farad. He’s a near-future cybernetically altered mind-reading super genius with a really hot car. His story, Wanted and Wired, hits book shelves April 4, 2017, but I asked him, and he said you could peek.

Just don’t tell anybody. We want to keep his realness between the two of us, okay? 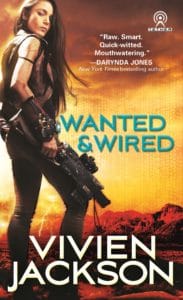 A Passionate Squee excerpt from Wanted and Wired by Vivien Jackson

“Heron? Can you read my mind?”

He pressed his lips tight together but otherwise stayed as still as he could. Which was not easy this close. To her. In the dark. He could feel her breath on his throat, and every part of him ached to close even the slight space between them.

Yes, technically, he’d been hearing her thoughts ever since he’d logged in to the Pentarc wireless. He hadn’t meant to let on, though. Blood and heat rose in his face, and he was glad of the dark.

He was somewhat less thrilled that he didn’t immediately compensate, though. What the hell was wrong with his internal systems? He regulated surface temperature and blood flow, but he still felt hot. No, not merely hot. His body was a wildfire, and he wielded an eyedropper trying to put out sparks. Clearly, harnessing all this extra power from the Pentarc was putting pressure on his control systems. He was holding steady, but just.

Mari waited, still and tense, for his answer. Finally, he huffed a breath against her hair, tasting her shampoo. His shampoo. Her body lathered in his smell.

He knew he ought to put some more space between them. Ought to step away. But he didn’t. He hardly moved at all, besides breathing. “The processing core of a hyperstructure like Pentarc is big, and I’ve appropriated a good portion of it, as much as I can on wireless. Imagine aiming a gun barrel the size of North America. All that firepower, and it’s all mine. The increased capacity enables me to access your thoughts.”

As if they behaved independently of his will, his hands sought her waist. The right one slipped beneath the burred terry of her robe, splayed against sweet, hot skin. The sense-tips in his fingers hummed with input, and there was no way he could process it all. Not with a thousand Pentarc cores at his disposal.

He couldn’t make himself step away. He wanted to hold her closer, closest. Never let go. He wanted to loose his questing thoughts into her brain, make her think whatever he pleased, or simply make her pleased. His body tightened, ached for her. God.

He was running a full four degrees hotter than normal. Not enough to fry electricals, but definitely in the danger zone. And no matter how much power he sucked from the arcology’s reactor, he couldn’t douse the flames in his body.

Her thoughts smothered him.

He could see her desire in vivid imagery, hear it in her voice, spoken and unspoken. Her mind was a garden, lush and golden and gorgeous, and he wanted to stretch out naked in it, let it grow over him and encase him. He wanted to be tangled in her.

Oh, hell, as if he hadn’t been for a long time now. The power surge was just making the partition of such thoughts harder than usual.

Mari leaned into his touch. “How long?”

He knew what she meant. She meant how long had he been reading her thoughts, if he’d been able to do it only since jacking into the Pentarc or if he’d had the capability before. But on the other hand, it sounded sordid, too, and she didn’t clarify out loud. Hell, knowing Mari, she probably meant the double entendre.

The air didn’t have enough oxygen. They might be hiding out in a multiroomed unit, but the foyer was damned cramped. Tiny. Stifling. Intimate. His thumb swept up, skirting the underside of her breast. Her breath hitched.

“Not long enough. But please, if you will, ponder something else.”

Sign up for Vivian Jackson’s newsletter to get the skinny on this and future releases: