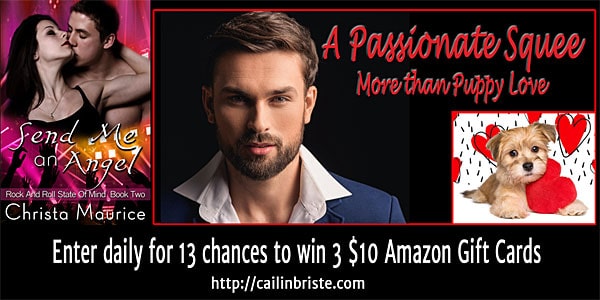 What’s more squeeable than a rockstar drummer who spends an entire day thinking about you! Answer? Not much. Christa Maurice shares an excerpt from the second in her Rock and Roll State of Mind series, Send Me an Angel. The fact that the book is on sale for $0.99 right now makes this worth a double squee. 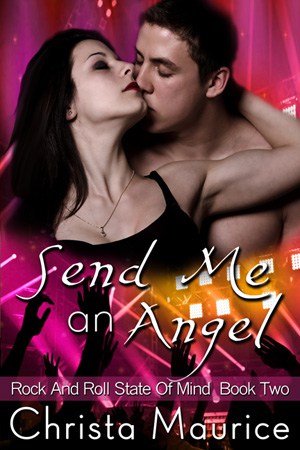 “Sorry, I didn’t mean to cause you trouble.” Alan stared at his feet. His stupidity was going to haunt him for the rest of his life. He should have just stayed in school and become an accountant like his dad wanted him to.

Angie smoothed her hands up his chest and onto his shoulders, craning her neck to look at him from so close. “You didn’t cause me trouble. Lena’s just a little touchy because Jasmine’s mother and her, meaning Lena’s, boyfriend were meth addicts. Jasmine’s mother died. Her boyfriend, the kids’ dad, is in jail. So she’s stuck raising all three kids by herself.”

“Those kids aren’t from the same family?”

“They are, but they’re cousins.” She wrapped her hands behind his neck. “You don’t need to worry about what other people think about you because you’re different now.”

Alan put his arms around her waist. She was so tiny and ferocious. “I am different now.”

“Good.” She stretched up on her toes, resting heavily on him.

He leaned down to kiss her. She sighed, twining her fingers into his hair. He felt her heart beating against his and the heat of her skin. He wanted to take her home and make love to her all night. Then he wanted to set her up as a queen. It was fast. Even for him, this was fast. He pressed his palm into the small of her back and she caught her breath.

He shrugged. He hadn’t had a cigarette since yesterday just for her. That was part of the all day spent thinking about her and what he wanted to do to her when he got her alone. He studied her face. Her eyes drooped and her mouth was tense. “You had a long day today.”

He brushed his fingers along her cheek. This close to her, he couldn’t resist touching her. “So, why don’t we grab some food and head back to my place? We can order a movie and relax.”

Christa Maurice spends a lot of time lost in imagination. When not writing, she loves to travel and has spent several years living overseas. She spent four years living in Abu Dhabi where the temperature was always hot, the sunrise and sunset were pretty stable year ‘round and she could go weeks without speaking to a man who wasn’t selling her groceries. You know what happens to a woman living in what amounts to a harem situation? She spends a lot of time talking about shoes and thinking about men. Which brings us right back to being lost in imagination…