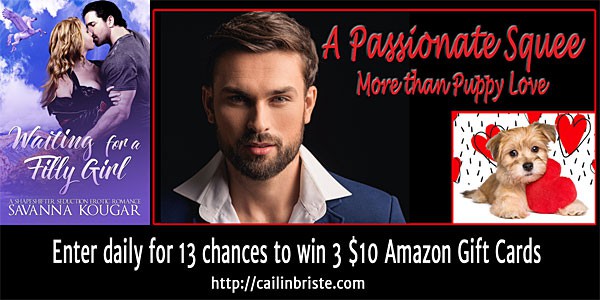 Drev makes Keina feel joyously, running-free feminine and then moves on to blistered on the inside and stunned by his power. Squuu-weeeeeee! This excerpt from Waiting for a Filly Girl by Savanna Kougar is a tough competitor in the A Passionate Squee Giveaway. 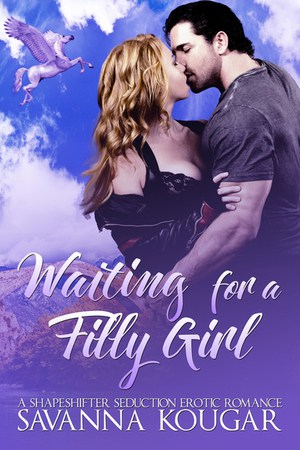 …A “no” squeaked out, and before Keina realized it, she’d shaken her head.

“No?” Alarm, disappointment owned Drev’s voice. His hold on her loosened.

“Not you,” Keina hastily corrected. She raised her head to meet his gaze. “The King’s visage…he…well, it’s torture to remember.” She pressed a kiss to his sandpapery chin. “Mmmm…I like your stubble, hunter.”

“This King in your realm, I don’t like him intimidating my girl.”

My girl. Keina trembled within.

The truth, oh yes, she wanted to be his. Right now, she wanted nothing more than to be claimed by him—feel him lunging inside her. His stud-hard cock jutted against her jean-covered pussy.

Drev hugged her close again. His body heat warmed her sex-o-liciously, and Keina stroked her hands up the back of his neck. She slid her fingers into his thick hair, then slowly loosened the band, pulling it off, freeing his mane.

“A boss stallion. My kind of man.” She throatily spoke, her lips still against his chin.

Keina combed her fingers through the long strands of his hair, and also teased him by languidly undulating against his magnificent and stud-superior torso.

He seized her lips, his kiss on the untamed side. Hungrily, his mouth moved over hers, possessing, persuading, and so fierce.

Wild for his masterful and talented lips, Keina returned his kisses with her own frenzied mouth. Their lips tangled, caressed, and erotically played in ways she’d never experienced. Yet, had always desired.

At the same time their upper bodies felt as though they couldn’t be separated.

With an impassioned growl, Drev stroked his large hands over her ass. His hold engulfed her haunches, arousing Keina further—passionately flaming her insides.

Kissing her hard, he cupped her butt, his grip dominant, and oh-so sexy. Keina reveled in how absolutely feminine he made her feel. Joyously, running-free feminine.

Lost to all reason, she moaned, then danced more fast kisses over his boldly shaped mouth. Keeping hold of her ass, Drev glided his thumbs over her thighs. The sensual strokes heightened her pleasure, and only increased her unbridled need for him.

As she sinuously moved against his chest, Keina feverishly fastened her lips to his. The delicious friction awakened her breasts further. Now pleasure competed with the torment of wanting him, of wanting Drev’s hands, his mouth all over her breasts.

Drev nipped her bottom lip. For instants, they stilled, their rapid pants crashing together. Then, their tongue tips touched, slowly exploring. Moments later, the points of their tongues pushed against each other in a contest of passion.

His tongue dived inside her mouth. To a beautiful torrid rhythm, their tongues twined, tasted each other, and fondled.

When the pace quickened, Keina dirty-danced her tongue against his, as she thought of it.  To a sultry beat, she rubbed her aroused nipples against his chest.

Recently, she’d entertained herself with the Patrick Swayze movie, “Dirty Dancing.” Alone in her apartment, she’d practiced the suggestive moves, and invented her own. Nothing like that style of dance existed in Equirion.

With excitement blazing through her, Keina untangled her tongue from his, and nipped so her teeth lightly grazed his chin. She slid her lips along his stubbly jawline until she could nibble his earlobe.

Drev crushed her against him. “Damn, I’m about to bust out of these pants, woman.”

Keina rocked her pussy on his hard-charging cock. “I’m steamy hot,” she whispered into his ear.

Drev placed several seductive kisses on the side of her neck. “Clothes.” He panted the word against her skin. “We don’t need them, do we?”

Keina grabbed the hem of his Henley knit shirt, jerking it upwards. Before she could unwrap her legs from his waist, Drev bolted across the room. Keina found herself pressed against a smooth warm wall.

With hurried tugs, she pulled Drev’s shirt off one arm, then over his head. She stripped it off his other arm. Where it dropped she had not a clue.

She clung to his bare, muscle-bulging shoulders. Relishing the ultra hunky feel of him, Keina covered his chest with kisses. Ravaging kisses.

“No fair,” he ground out. With a firm shove on her shoulders, Drev pinned her against the wall. His mouth smashed against hers in another delirious-making kiss, even as his fingers impatiently undid the buttons on her shirt.

Before she knew it, Drev slipped the garment from her shoulders and arms. A cool draft of air brushed her exposed breasts, and Keina felt her nipples pebble more.

Breathless, wanton, she arched. Her breasts flattened against the muscle-carved heat of his chest, causing arousal to zing through her.

Drev loosened the ties, sliding them off her feet, and Keina heard the thunk as her boots hit the floor. Immediately, she planted her heels on the solid strength of Drev’s ass.

She rubbed her slick sex on his six-pack abdomen, and writhed against him.  “Your pants, take them off, hunter.”

“Anything you want.” Drev secured her against him with one arm. Keina shivered inside at his warrior strength—red-hot shivered.

Obviously in the throes of lust, he bent to the side, keeping his hand beneath her butt. After a brief struggle with his zipper, Drev shoved at his pants, while half-hopping and contorting his body.

The instant he stepped out of them, and straightened, his cockhead thrust against the crotch of her jeans.

“Hang on to my neck, darlin’. You’re comin’ out of those denims.”

“Coming is right.” Keina panted her words as she threw her arms around his neck.

Drev clamped her waist with his hands lifting so her legs released his waist. “Hang on,” he raspy encouraged.

His thumbs slid beneath the waistband, and with quick finesse, he unzipped her jeans. He peeled them over her hips and thighs. Gravity did the rest.

Keina swung her legs up, surrounding his waist again. The crown of his cock penetrated her juicy folds, torch-hot penetrated. Yet he didn’t buck inside her.

Instead he seized her hair, and gave a passionate yank. With her lips beneath his, he growled, “I want more.”

Flubergastov! Deep in his eyes, gold and emerald exploded into sparks.

Blistered on the inside, and stunned by his power, Keina did some exploding of her own. Her desire flamed way out of control.

“Please, hunter, my breasts want you.”

Baby boomer and redhead, I’ve always danced to the beat of a different drum. I live on the tame prairie in the Midwest with my beloved pets. My interests have always been eclectic, and anything creative. As well, my over-active imagination has played a huge role in my life, and I’ve been writing romance stories since age thirteen.

Most of all, I love my heroines and heroes. I love writing their stories, the various unique worlds they inhabit, and their action-adventures together.