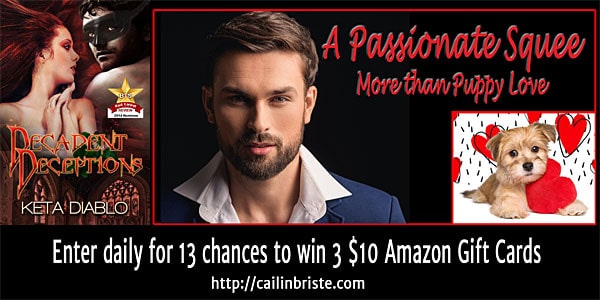 Determined to win Morgan Gatewood’s love, Olivia Breedlove lures the decadent man into a game of cat and mouse. What began as a ploy to force him to commit, tumbles into a world rife with voyeurism, deception and murder. Morgan must not only beat Olivia at her own game but stay one step ahead of the serial killer who has her in his sights.

This novel is scorchingly hot and includes scenes of bondage. There is a HEA and no cliffhangers 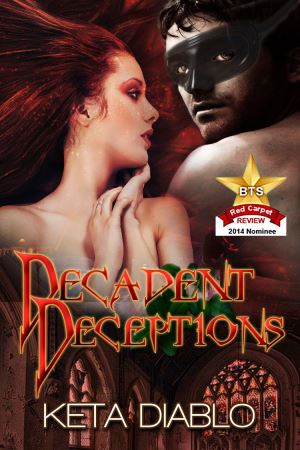 A Pasionate Squee Excerpt from Decadent Deceptions by Keta Diablo

Setup: Morgan has escorted Olivia to L’Immortelles, an elegant brothel, where she can watch couples in amorous liaisons. In the carriage on the way home, tension between the unrequited lovers reigns.

Nothing stood between Morgan and Olivia in the carriage except pale moonlight and a vacant air that hissed with tension.

Olivia waited as long as she dared and then attempted to relieve the awkward quiet. “You’ll never believe it, Morgan, I recognized someone tonight.”

His head turned sharply as he looked at her. “Who?”

“I don’t believe I’ll tell you. It might spoil things.”

“What do you mean, spoil things?”

“It would no longer be my private little secret, and besides, it’s one thing to watch someone—”

“Spy on someone you mean.”

“Oh have it your way,” she said. “I was about to say, it’s one thing to observe someone fornicating; it’s another to reveal their name.”

“Not telling you.” She ran her hands down the front of Cain’s shirt and changed the subject. “Oh, nothing in the world compares to desire or love.”

“There is one thing better.”

A short laugh left her lips. “What might that be?”

Olivia stared, arrested by the raw male potency emanating from the man. Had he just challenged her, knowing she hungered for what she’d witnessed tonight? Damn the cad. He didn’t think she had the courage to take this to the next level. Or did he mean he didn’t give a fig’s leaf if she relinquished her virginity to another man? At that possibility, her heart sank.

“How poetic.” Without missing a beat, she attempted to decipher the meaning behind his words. “Do you read poetry?”

At his dour response, she continued. “Do you want to know what I observed tonight?”

“But I have questions.”

“You know perfectly well I no longer have a nanny, and why are you behaving so rudely?”

“Well, bear with me, we’re almost home. The questions couldn’t make a man of your repute uncomfortable, and I’m baffled.”

He blew air through his lips. “Very well, what is it?”

“Why is it so smoky in there, and what’s that sweet smell accompanying the smoke, and—”

“Opium! Good heavens, Morgan, you took me to an opium den?”

“No, I took you to a fucking den, at your request I must remind you.”

She blushed and directed him back to the subject at hand. “The woman smoked it.”

He shook his head. “You are such an innocent, Olivia. Of course she smoked it. They all do.”

“What else? You said questions.”

Caught off guard, his eyes widened. “You watched more than one?”

“Two,” she said, feeling superior. “And therein lays the problem. The second couple, including the man I recognized, performed exemplary, comparable to the pictures I’ve seen.”

He rolled his eyes.

“I mean to say, they progressed as I imagined.” Here, she paused. “Until he spanked her.”

Morgan swallowed hard. “You enjoyed that; didn’t you, Liv?”

“Did you imagine he was spanking you?”

Concentrating on controlling her breathing and mistrustful of her voice, she shook her head. His inflection had changed on the last question along with the sensual line of his lips when he pressed them together.

Recovering from the sudden rush of dizziness and all in favor of goading him further, Olivia continued. “Then, they, you know, did it. Beyond ravenous, he flung her onto the bed and took her from—”

He shifted in the seat, his voice thin. “What is your question about the first couple?”

“Well they never consummated it. He merely….” She licked her bottom lip, Morgan’s proximity searing her senses. Talking to him about such intimacies and feeling the way she did about him unnerved her, yet she pushed onward. She’d touched a chord; she sensed it, her intent from the beginning. Pressing on with her heart in her throat, she blurted, “He pleasured her without using his penis—thoroughly, I might add—and he still paid her.”

“Continue, Olivia, I know you’re going to tell me every tawdry detail, whether I want to hear them or not.”

She leaned forward, softening her voice for effect. “He suckled her first and next, placed his head between her thighs.” She searched his eyes to read his thoughts, but his magnificent features were staid. “And then, he licked her—”

“Enough, I get the picture.” He lifted his hand between them. “What is your question?”

“While there can be no doubt she was wholly, unconditionally satisfied, what did he get out of it?” Shifting back into the seat, she paused. “I mean, why did he squander good money to do such a thing without, you know…?”

“Without fucking her, Olivia, isn’t that what you mean?”

Her nipples hardened and a shudder raked her. “You needn’t be so crude. I just wanted to know why he bothered.”

“Because he likes that! Jesus!”

“Don’t be such a ninny, Morgan. You did promise Cain you’d tutor me; take me under your wing so to speak.”

“I’m reneging on that part of the bargain,” he replied. “I don’t want to tutor you, hear all about your voyeurism. I’ll make sure you get to the next appointment in two weeks and safely home again and that’s all. I don’t want to hear every blasted detail of what you saw. Do you understand me, Olivia?”

The carriage rounded a corner on two wheels, eliciting a scream from one of the horses. “Something must have spooked one of the—”

The transport swerved. Hurtled from the seat, Olivia ended up on the floor at Morgan’s feet. He reached for her and pulled her into his lap until her legs straddled his hips, her breasts pressed against his chest. Whatever had happened outside, the driver seemed to have everything under control.

How she wished she did.

Their eyes locked and time stopped on the periphery of some distant plane. Morgan’s hand tangled in the long hair at the back of her head, and he drew her to him, his mouth demanding and ravishing. Her heart quickened. His tongue parted her lips and swept through every crevice as if to memorize the taste of her. She pressed her body against him, reveling in the feel of every hard muscle of his chest and the strong thighs beneath her. He quit her mouth and bestowed breathless, titillating kisses along her neck and throat, sending tremors through her blood.

“You like that, don’t you, Olivia,” he whispered against her ear. “And this,” he said, slipping a hand down her pants to massage the juncture between her thighs with his fingers.

She clenched her teeth and stifled a moan, her pleasure peaking in a delirious state. Oh, God, yes, she almost moaned aloud.

His fingers caressed the outer folds of her sex, bare flesh against bare flesh. She twisted beneath him and clung to his shoulders, her nails digging into his taut skin. She had to stop this or soon he’d take her on the seat of the coach. She strained her hips away from him, but he would have none of that. His erection prodded her belly, and his free hand slid to the small of her back. He held her immobile and forced her to acknowledge his physical desire. Guiding her hips in a slow rotation, and with his fingers still stroking her sex, Olivia’s body throbbed and quivers of ecstasy surged through her.

“Morgan, please, you must stop,” she groaned.

“Isn’t this what you wanted? Isn’t it why you went to Immortelles?”

God help her, she wanted to.

She allowed her hand to wander between their bodies and close around his manhood through his trousers. She gasped, the sensation of touching him both shocking and delicious.

“Say it, Olivia. Say you want me inside you. Give in to your desire. Admit you lust after me like I lust after you.”

The carriage stopped. He removed his hand from her pants and set her back onto the seat with an all-knowing smirk. For Olivia, it was like a dream. It couldn’t have happened, yet why did she burn all over, hunger for more?

She straightened her clothing and tried to recapture the same haughty air she had assumed earlier. “Well, here we are,” she said, placing a hand on his forearm. “Thank you, Morgan. I do appreciate your assistance.”

His smirk evaporated, and he looked as though he’d like to strangle her.

“I’m confident that at the conclusion of this adventure I’ll recognize more of Cain’s friends. Yours too,” she contnued, pretending nothing had passed between them, yet dying inside. “I’ll be able to come to a sensible decision.”

“Think nothing of it,” he said, and she knew he was doing his best to control his anger. 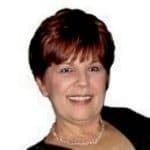 Keta Diablo lives in the Midwest part of the United States on six acres of woodland. When she isn’t writing or gardening she loves to commune with nature. A lifelong animal lover, she also devotes her time and support to the local animal shelters.

You can find her on the net at the following places: