Firstly, I’d thank you so much Cailin for letting me drop by. I’ve brought a young friend with me, Ben Devlin, and he wants to tell you something. Go one, Ben, It’s okay.

Ben, why don’t you tell everyone about yourself?

Hi, I’m Ben Devlin. I’m ten years old, almost eleven. I’m a bit skinny but mom says I’ll fill out as I get bigger. I want to learn jujitsu or something, but there’s no classes in Westhorpe Ridge. I didn’t really want to move here, but mom went ahead and bought the hotel from her grandmother. Now I’m here, I love living by the sea.

My hair’s black and I’ve got too many curls. I want to get it hair cut really short to get rid of my curls, but mom won’t let me. Is that okay?

That’s fine, Ben. Tell us about your time before you came to Westhorpe Ridge

We lived in Washington DC, in a tiny apartment. Mom never let me play out like she does here. Did I say she bought me a new bike for Christmas? It’s black with gold flames painted on the frame.

Sorry, you wanted to know about Washington. I spent ages at the after-school clubs or training for the baseball team. There’s just me and mom, you see. She had me the year after high school. Then she went to college to get her Maths degree. There’s always been just the two of us. My dad’s a scumbag who walked away and left her when she was pregnant—only mom doesn’t like me calling him that.

What does your mom do for a living?

Mom always taught high school, but with lesson prep and everything, she never got to Baseball games or even school shows. I hated that.

If I’d had a dad, she might have been able to come. Then, about six months back, she announced she was buying her grandmother’s hotel and moving back to Westhorpe Ridge.

Now she runs Devlin’s Hotel. It’s great because she’s there when our school team has a game, but she’s always tired. She gets up at dawn and doesn’t go to bed until late. I think the hotel needs more things doing than she expected.

What’s the best thing about living in Westhopre Ridge

Duffy. The sheriff’s dog. Sean, that’s the sheriff, is married to Jazz who runs the hotel bakery. Mom grew up in Westhorpe Ridge and she was at school with Sean. I think she kissed his best friend, Adam. Sean talks about Adam a lot.

I can’t believe mom ever dated a creep like Adam

Sean said Adam went to medical school in California then he joined the Army. I wish he’d stayed there. Instead, he came back here yesterday, and he yelled at me. Okay, he pulled me out of a rip current first, but he’s horrible. I wish mom had never been friends with him then I wouldn’t have to see him again. I don’t think mom likes him much since she hit him on the head with a beer bottle. 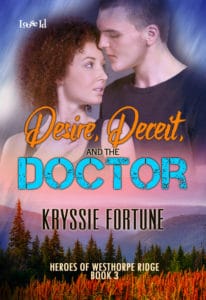 Desire, Deceit, and the Doctor

After Adam Montgomery walked away and left her pregnant, dare Mandy trust him with her heart again?

Twelve years ago, Mandy Devlin moved away from her friends and family–under threat. If she returned in the next ten years or told anyone who fathered her baby, her boyfriend’s great-aunt would bankrupt her family. She’s a single mom who dreams of her lost love and a good spanking. When she’s finally free to return to Westhorpe Ridge, the last person she expects to see is Adam—the man she loved and lost so long ago.

Dr. Adam Montgomery doesn’t know he has a son. Thanks to his great-aunt’s will, he has nine months to find a bride or he loses Montgomery Hall and the fifteen million dollars she left him. Although he seduces Mandy on his first night home, he still believes she betrayed him twelve years ago. No way would he marry a woman like her.

As Valentine’s Day looms, someone tries to kill Mandy. Is Adam trying to get rid of her? Or can Mandy trust him to protect them?

Buy Desire, Deceit, and the Doctor

Kryssie likes her contemporary heroes ex-military and dominant. Her heroines are kick ass females who can hold their own against whatever life – or Kryssie – throws at them.

Kryssie’s pet hates are unhappy endings, and a series that ends on a cliff hanger.

Her books are all stand alone, even when they’re part of a series. Plot always comes before sex, but when her heroines and heroes get together, the sex is explosive and explicit.