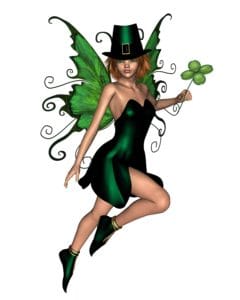 Adrianna, thanks for stopping by the blog. Shane: Marshal of Tallav readers want to know what your first St. Patrick’s Day on Tallav was like. Tallavans have taken on Irish customs from the very beginning of the planet’s settlement. What kinds of things do they do to celebrate?

Adrianna: It amazes me that no matter where you go in the Federation, you’ll find people who claim Irish ancestry and lots of folks who don’t that love to celebrate St. Patrick’s Day. Tallav takes the day very seriously, but with some unique twists.

Tallav was founded as a matriarchal planet, and despite the Great Catholic Reawakening that brought many Tallavans back into the Reformed Catholic fold, the majority of Tallavans prefer not to celebrate a Catholic saint. Too patriarchal. But with people the Federation over celebrating this particular Irish holiday, they had to do something.

Their celebrations revolve around the Fae who serve the  Mother Goddess by bringing Spring. Tallav is blessed by a similar calendar to old earth, so the holiday comes at the right time of the year for this. Gifts are left for the Fae the night before. Local priestesses of the Mother Goddess go from house to house blessing each home and anyone who wishes to be personally blessed.

Of course, the wearing of the green is part of the celebration for both those who practice the Mother Goddess rituals and the Reformed Catholics who pursue a more traditional St. Patrick’s Day. Both groups also spend time at the local pub, drinking Guinness (brewed on Tallav), singing, and dancing.

In Cahernamon there’s a big Irish Dance Festival with groups from all over Tallav competing in a step-dancing competition.

What’s your favorite part of St. Patrick’s Day on Tallav?

Adrianna: Shane and I rode horseback to a meadow on Gleann Milis, his family estate. It has a huge patch of Shamrocks. We took a picnic basket and blankets to snuggle in because it was a bit chilly. We drank hard cider, and I got a wee bit tipsy. That’s my excuse for why we both look rumpled when we returned home.

Sounds special. Thanks for sharing Adrianna. I’ll let you get back to that handsome hero of yours, Shane Tiernan.