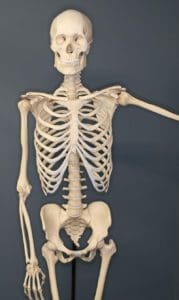 The first book I ever wrote was written with nothing more than a rough idea in my mind about where it was headed. A writer who works in such a way is called a pantser. My story was character driven. The more I wrote, the more Shane and Adrianna revealed about themselves and their path to a happily ever.

I was thrilled when the book was completed. Until I submitted it for a developmental edit and discovered there were bones missing and others were in the wrong spot. I’d swapped the ulna and radius, so the carpals were out of joint. I found a tibia under my desk, which explained why the story wasn’t moving in a straight line but hopping all over the place. It took a lot of work and many revisions to fix the problems.

But, you say, you learned your lesson. The next story you wrote, you surely created an outline before plunging in.

Thank you for your faith in me, but sadly. I didn’t. Oh, I did have an outline of sorts, but it was cursory at best. Dem bones were all in their proper places, but they were more like a string puppet that can’t support its own weight than the solid skeleton that struts and frets his hour upon the stage. (Apologies. For some unknown reason the Bard just popped into my head.)

I was determined that with my next writing project I would abandon my pantser ways and become a full-fledged plotter. My next project was a novella. Shorter, less convoluted helped. I had my skeleton properly constructed before I began to write, and the fleshing out was so much easier. I wrote more words a day. I went from 500 words to 1000 easily. O frabjous day! Callooh! Callay!

Do my characters still speak to me while I’m writing. Sure. They’re particularly good at pointing out inconsistencies. “I’d never do that. Never!” Rightie-o. But they rarely require a complete skeletal transplant. Along the way, I’ve broadened and deepened the character sketches I create for my main protagonists. I know my characters better and know the things that will yank their chains and create conflict in their lives. The outline reflects those insights.

Becoming a plotter hasn’t dampened the creative flow of my writing. There’s so much of a story that isn’t found in the outline. I may know that a character likes to tell puns, but the actual puns come as inspiration on the fly. Things pop into my head at the right moment. But you’ve witnessed that even in this essay on my writing process. Macbeth to Jabberwocky. That’s the way my mind skips around. And another reason why becoming a plotter was a necessity for me. I get lost down rabbit trails and never make my way back to where I was supposed to be heading. Dem bones keep me on track.

“Stop that. You’re going to break my arm!”

Yes, dem bones can talk to you, too.