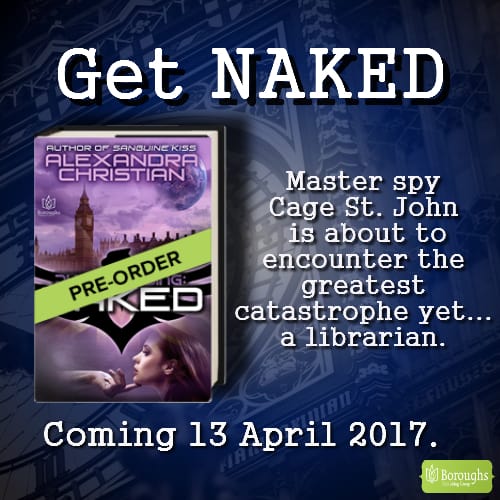 The suspense is not over even though Alexandra Christian’s new sci-fi romance, Naked: Phoenix Rising #1, has just released. Chockful of the kind of action typical of a James Bond film, this sounds like one thrilling read.

Phoebe Addison enlists the help of the mysterious Cage St. John, to save her sister on Mars while dangerous Others are streaming onto Earth through a portal the world’s governments would kill to keep secret 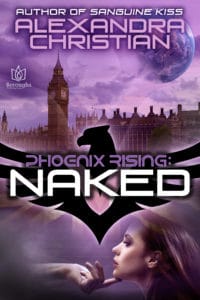 Blurb:
Following a brutal act of vengeance, MI:6 agent Macijah St. John is left grieving for his slaughtered family and agrees to participate in a secret government experiment that gives him a magnificent and terrible power.  Now he’s a mercenary spy that solves problems for the right price.  His latest job puts him in the path of the greatest catastrophe yet—a librarian.

Phoebe Addison’s life is a disaster. Crippling debt, a non-existent social life, and being the town librarian is hardly the glamorous existence she’d always dreamed of. But when her sister Jessica, an interplanetary archeologist, gets herself involved with a psychotic billionaire bent on world domination, Phoe is about to get more excitement than she bargained for.

“Hey…” she sighed, taking the curve of his jaw in the palm of her hand and raising his eyes to meet hers. “I’m okay. You saved my life. For like… the millionth time.”  He didn’t move, so she didn’t pull away, finally able to observe him. His jaw was set, tense as he stared at her with those dusky, changeable eyes. But Phoe could feel a tremble there. A fear lurking underneath that she would never have expected a man like Cage to possess. “I’m fine.”

“And what in hell were you doing?” he said, snapping his head up to glare at her. “I told you to run away and you did exactly the opposite of what I said! You could have been killed! Or worse, bitten! You just… you don’t understand, Phoe. I’m supposed to protect you, and I didn’t protect you. I can’t lose another…”  His words trailed off. She could tell he wanted to say more but wouldn’t. She held his gaze, but he looked away, as if he were hiding some weakness he couldn’t stand for her to see. There was some trauma lurking there.

“What are you talking about?” she said. “Help me understand.”

He rolled back on his heels and rose quickly, his shoulder brushing against the bedside table and nearly toppling the glass of tea, an uncharacteristically clumsy movement. “Just leave it alone, Phoe. My demons are my own.”  The weakness was gone, and now that hard-edged, barely contained anger returned. She knew if she pressed him that he would lash out. She was starting to understand, to be able to read his moods that had seemed so random and mysterious when they’d first met. There was a scab, healed over but still burning. “Rest up,” he said, turning to walk away. “We’ll leave at sunset. Addie has a car.”

Swallowing her nausea, she threw back the blanket and stumbled out of the bed toward him. “Wait… Cage…”

He stopped but didn’t turn.

“Look, I don’t know what’s happened to you in your past. But we all have demons. Some of us, more than most people. I get it.”  She lay a hand on his shoulder, feeling the tremble of muscles pulled tight. The sensation of gentle touch had evidently become a foreign concept, and his first reaction was to flee. His head turned, staring down at where the cool, pearlescent flesh of her fingertips rested against him. Such a profile, his eyes gazing downward and just the faint glisten of a single tear resting just under his eyelashes. Phoe’s heart broke for him. “You can trust me.”

“I do trust you, Phoe.”  She slid her arm along his shoulder, and he turned, enveloping her body in a gentle embrace. He brushed a hand over her brow, smoothing back the stray locks that fell around her face. Being so close to him, she felt small and skittish. If he loosened his grasp even just a little, she feared she would retreat. He took her hand, bringing it to his lips and then pressing her palm against his cheek. Instantly his body relaxed, as if her touch were some sort of calming drug. Phoebe could actually feel the tension melting from his embrace. His eyes were full of fire and his breathing labored. Phoe couldn’t believe that it was her doing this to him. That all of this was for her. “I don’t trust me,” he went on. She was mesmerized by the curves of his lips as he spoke and without even realizing, she’d moved closer. Only a breath between them, and then their lips touched. He kissed her, lightly at first then more insistent. Phoe was stiff, the sensation so unfamiliar as his sumptuous mouth caressed her lower lip, worrying it gently, teaching her what to do. She melted into his embrace, and he teased the crease of her mouth with the tip of his tongue, coaxing it open before taking possession. Cage stole her breath and then offered his own. His arms tightened around her waist as he pulled her in against him, letting his hands rest on her hips as their kiss went on and on. When he let her go, Phoe stumbled, holding her dizzy head. A fluttery feeling rose in the pit of her belly, and all she wanted to do was kiss him again.

Get Your Copy Now!

Alexandra Christian is an author of mostly romance with a speculative slant. Her love of Stephen King and sweet tea has flavored her fiction with a Southern Gothic sensibility that reeks of Spanish moss and deep fried eccentricity. As one-half of the writing team at Little Red Hen Romance, she’s committed to bringing exciting stories and sapiosexual love monkeys to intelligent readers everywhere. Lexx also likes to keep her fingers in lots of different pies having written everything from sci-fi and horror to Sherlock Holmes adventures. Her alter-ego, A.C. Thompson, is also the editor of the highly successful Improbable Adventures of Sherlock Holmes series of anthologies.

A self-proclaimed “Southern Belle from Hell,” Lexx is a native South Carolinian who lives with an epileptic wiener dog and her husband, author Tally Johnson. Her long-term aspirations are to one day be a best-selling authoress and part-time pinup girl. She’s a member of Romance Writers of America and Broad Universe—an organization that supports female authors of speculative fiction.