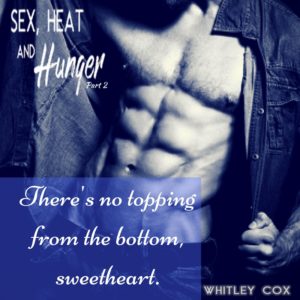 My heat-level ratings for books flames out at Ack! I think I burnt myself. Sex, Heat and Hunger: Part 2 will virtually melt your eReader. If that entices you, you’re in luck. It releases today, April 29, 2017.

Blurb
From handshake to obsession…

Emma Everly only ever dreamed of meeting a man like millionaire project developer James Shaw. She never imaged she would fall in love with him, a man so intense, so dominating he radiates power and control no matter where he goes. What begins as a sex-only arrangement for pleasure becomes a heated, hungry, all-consuming obsession. James claims the keys to her heart and her mind, opening them to the wilder side of sex and bondage. But her painful history with relationships gets in the way of accepting that he finds her beautiful and worthy of love.

James is devoted to caring for Emma’s every need, but his past haunts him, too. Guarded and evasive, he avoids Emma’s questions, unwilling to divulge his secrets. She knows the only way to truly earn James’ trust and get him to open his heart is to show him just how committed she is. Despite her lingering fears and people determined to tear them apart, can she go all-in and give herself entirely to him, body and soul?

Excerpt
Turning around and taking me in his arms, he kissed me soundly, his tongue wasting no time with formalities and wedging its way between my lips, savouring me, tasting me. I tasted him in return, whimpering slightly as the rush of need ran rampant through me. I wilted against him and let his big hands cradle my back, arching me against him so I could feel just how much he missed me.

“Hi,” I managed to say after I caught my breath, James’ cobalt eyes twinkling with love. I ran my hands up and into his hair, pulling ever so slightly on the dark silky strands.

He growled low and manly. “God, I missed you.” His lips against my neck, peppered kisses up one side and down the other.

“I missed you too.” I put the grocery bag up on the counter and went over to peek inside the oven; it was chicken parmesan —yum. “I thought we were just going to take my parents out for dinner tonight, and then maybe eat in tomorrow night. You said you had to work late.”

He lifted one sexy shoulder. “Yeah, I know, but I worked so much over the last three days that I’m just drained, and I want to make a good impression on your folks. And I’m dying to fuck you. Serious blue-balls here.” He pinned me against the counter with his hard body. “It’s been a long hard week. Very hard, if you get my drift. And you smell so damn good.” He thrust his hips into mine, deftly rotating them, my eyes closed from the delicious friction against my clit. Even with layers of clothes between us, the man drove me wild, made me swoon, made me yearn to yield to him. “Do we have time for a quickie before they get here?” He wiggled his eyebrows and then tilted his head down to nip at my neck.

“Probably not.” I pouted. “They’ll be here any minute. Are you nervous?” I reluctantly pushed out of his grasp and started putting the groceries away in the fridge.

“No. Well, maybe a little. I haven’t really done the whole ‘meet the parents’ thing before, and I really want them to like me. I’m kind of in love with their daughter, you know? Besotted in fact.” I looked at him and raised my eyebrows. “Oh yeah…” He nodded. “I bought a Word of the Day Calendar, I need to keep up with your verbose loquacity, and today’s word was besotted.”

He poured a glass of Zinfandel and handed it to me as I giggled at his use of the new word, his playful grin making my knees weak and my core tighten in need.

“I know.” I wrapped my arms around his neck and stood on my toes, so I was eye level with his mouth. “They’ll love you, don’t worry. And I’m besotted with you too.”

Suddenly there was a knock at the door. I looked at the clock on the microwave, it said six thirty —show time!

About the Author
Whitley Cox is an English Major turned Psych Major, who after all was said and done came out with a B.A. in Psychology, and then subsequently moved to Indonesia to teach English. But after finding out that the school was not on the up and up (when Immigration came to scope out the teachers she was forced to hide in a closet because the school had not actually purchased a work permit for her), she broke her contract and took off traveling. Only to then return home and start working with children on the Autism spectrum as an intervention therapist, and begin writing her first book.

A West Coast baby born and raised, Whitley is married to her high school sweetheart and together they have a spirited toddler and a fluffy dog. She spends her days making food that gets thrown on the floor, vacuuming Cheerios out from under the couch and making sure that the dog food doesn’t end up in the air conditioner. But when nap time comes, and it’s not quite wine o’clock, Whitley sits down, avoids the pile of laundry on the couch, and writes.