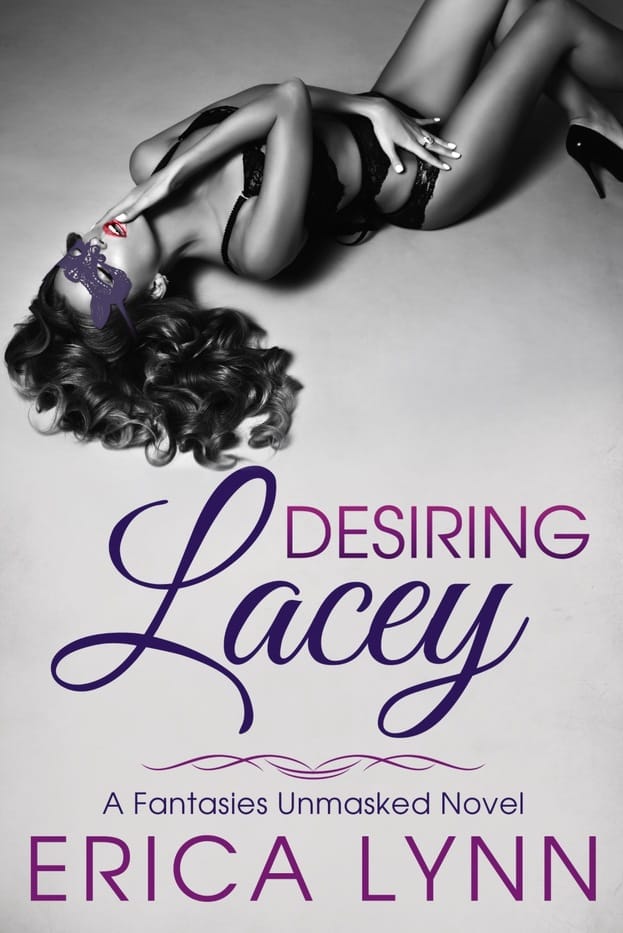 Prepare yourself. An ice cold drink in hand if you’re in public when you read this tantalizing excerpt is an absolute must. Alone with your significant other? Perfect read aloud!

Lacey Wilson is a lot of things. She’s beautiful. Sweet. A little sassy. And about to be divorced. Now, on the verge of turning thirty, she’s on a mission to find herself, both emotionally and sexually. No attachments. No baggage. No problems. But when her best friend convinces her to attend a private party, where masked men and women go to have a little anonymous fun, she finds herself staring into the eyes of the most incredible man she’s ever seen, and caution gets thrown to the wind. After all, what’s just one night?

Cameron Jennings likes to keep things simple. He helps out at his father’s garage during the day, then goes home to a few beers and TV. No muss, no fuss. Until one night when he’s working as the doorman at a private party, and meets her… Once he slips the purple mask over Lacey’s eyes and gets a taste of what she has to offer, he’s done for.

With Lacey on a mission to rebuild her life, and Cameron completely infatuated, will she be able to convince him they could never have a real future after the way they met? Or will he prove her wrong?

“What’s he doing to her?” Cameron asked as his hands made their way down to her chest, and his long fingers massaged the tops of her breasts over her dress. He applied perfect pressure, squeezing them just right, and her nipples hardened beneath his touch.

Cameron chuckled and allowed his hands to travel to her waist. “Going down on her? Please. That’s what guys do when they feel it’s something they have to do. Like it’s a chore.” He removed his hands, then made his way around her chair until he was in front of her. He placed his palms on her shaking knees, his thumbs still massaging, and ran his tongue over his lips. “Open your legs?”

Lacey watched her legs tremble as she parted them slightly, allowing Cameron to slide in between them. The feel of his body and his heat against her center had her helplessly trying to grind into the chair. Anything to get some friction where she needed it most.

He leaned in until their lips almost touched, but stopped just short of kissing her. “What he’s doing, Lacey, is eating her pussy.” He ran his mouth across her cheek and to her ear, his hot breath sending chills up her spine as he spoke. “Watch him. He’s devouring her. He wants to feel every ounce of her wetness on his tongue, then he wants to swallow it down. Do you see? Can you tell the difference?”

Lacey watched, transfixed, as the man’s tongue disappeared in and out of the woman. She heard him moan as he used his fingers to fill her up. Every now and then, he’d place one of them back into his mouth and suck off her juices, then he’d grab her thighs or hips and push her down farther into his mouth. Onto his face.

“Oh!” Lacey threw her head back as Cameron used the palm of his hand to push against her center.

“Yes…yes please.” She clumsily attempted to remove her stockings, but he took her hands and placed them on the armrests.

“No need,” he grabbed the middle of her pantyhose, right above her sex, and ripped them open.

Her center throbbed from both her need and the cool air that now caressed her sensitive skin. She could feel her wetness on her inner thighs, and she attempted to rub them together to get some sort of relief, but it proved impossible with him kneeling between her legs.

Cameron leaned down and hovered just above her sex.

Her legs shook, her fingers dug into the armrests, and her hips continuously rose off the chair involuntarily. Just when she was ready to beg for him to put his mouth on her, she felt his tongue softly skate over her lips.

“Keep looking at them,” he whispered against her. “Watch them while I eat you.”

She’s a self­-proclaimed reality TV junkie, and especially loves The Real Housewives. In her few and fleeting spare moments, she loves to settle down with a nice glass of wine and a sexy book.