So, why my interest in vampires?

One of the heroes in my latest release Claimed by the Vampire, Seduced by the Werewolf is one. The other’s a werewolf. What a shame they hate each other 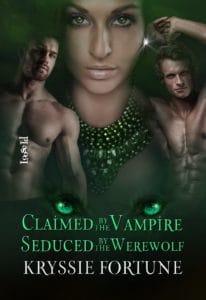 Vampire and werewolf loathe each other. The only thing they agree on is that Tempest is their mate–and they’re not sharing.

A prophecy will force Tempest, a twenty-first-century witch, to choose between them. As the half-brothers vie to win her heart, they teach her about spanking, the way pain heightens pleasure, and the joy of multiple orgasms.

A vampire can’t survive without his fated bride. A werewolf dies if he loses his mate. Their future rests in Tempest’s hands. Which one will she choose?

Note: While loosely linked to the Scattered Siblings series, this book may be read as a stand-
alone story