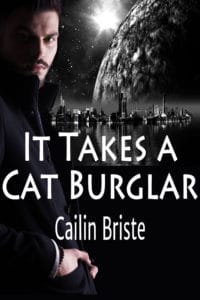 He’s a thief, a cat burglar, training her to become his partner not his lover. Failure to resist his fierce attraction to her could destroy his sister’s happiness.

Darcelle’s reflection stared back at her from the solid mirror that covered the side of the Jepsen Building where she hung, suspended twelve hundred feet above the city sidewalk. Anger and determination filled the charcoal-gray eyes of her mirror image. Even as an infant, the darkness integral to her nature must have peered out of round, solemn baby eyes that weren’t the expected dark brown of her mother and father or the amber of her twin sister. No, she’d been born with eyes best described as a grayish mist. With each passing year, they’d grown darker. Someday they might rival the night sky that tonight was a wash of black pushed back by the ineffectual streetlights below and the pale serenity of a waning moon. The skull cap she wore covered the braids she’d used to tame her masses of kinky cinnamon curls.

No breeze stirred the night air, for which she was thankful. The micro-cable anchored to the sidewalk didn’t allow for much sway as the winch above pulled her higher. The noise of traffic wafted up like a soundtrack to another reality.

She swung a leg over the ledge surrounding the roof of the building. Sunrise was less than an hour away, but for now, the wealthy residents of the Jepsen slept below her, convinced that the security they spent thousands of credits on created an impenetrable barrier around them. She smirked, satisfied she was about to prove them wrong. The latest antiskimmer technology may prevent aircars from landing, but it didn’t keep out birds or, as in her case, people who avoided the domed security field by slipping under it at the edge of the building’s roof.

Security plans always had holes. Her day job at the Art et Antiquités Institut de la Sécurité was to close those she discovered in her client’s protection profiles, or at least render them too small to be exploited. Your average cat burglar couldn’t accomplish what she was attempting. The mirrored facade of the building resisted any attachments, so any of the standard slick surface anchors were worthless, as were the nonslip soles of her shoes. It was worse than trying to climb on ice.

Over the last year Darcelle had honed her skills to surpass those of the typical thief. The instructions she received before each job had included training exercises and detailed steps for committing each robbery. It was as though she was being mentored by a master thief, a man she’d never seen much less met or spoken with. Notes were his sole means of communication, written in a flowing script that was both masculine and artistic.

This was the most difficult assignment she’d received. She couldn’t land on the top of the building, she couldn’t climb the side, and attempting to penetrate through an entrance was equally impossible. Not a problem.

The surface of the roof was covered in fine-grain sand. She dropped from the ledge, squatting to avoid skidding and falling on her ass. The bands of her harness burned as though they were embedded in her skin. She snapped the releases and pulled the harness off, rubbing between her legs and over her lower butt cheeks. The painful part of this operation was over. She let the harness fall next to the winch. When the break-in was discovered, they’d find the hoist chem-sealed to the ledge of the Jepsen’s roof. Let the security guards figure that out. It hadn’t taken her long the previous night to use a gravity drone to slip it under the security field and drop it onto the ledge. The breakable containers filled with chems on the winch’s underside had smashed, allowing the contents to mix and bond the winch to the stone, and the hoist had been ready to use.

She turned, squinting across the roof at an aircar circling in the distance. Time to get indoors.

Purchase at Amazon or read for Free with Kindle Unlimited.