I’m excited to share the cover reveal for the soon to be released print version of Erica Lynn’s  Love and Justice Novella Series. Three novellas in one volume. 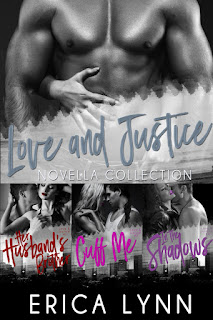 Her Husband’s Brother:
Lexie Hayes knows her marriage is over. After working endlessly to fix things, she’s decided to move on and find happiness elsewhere. The last thing she needs is to run into her sexy-as-hell brother-in-law at a nightclub on her birthday. He’s cocky, arrogant, and so damn kissable she can barely hold on to her sanity.

Jonathon Hayes has always wanted his sister-in-law. She’s gorgeous, feisty, and unbeknownst to her, married to the largest drug supplier in the Houston and San Antonio areas. When fate puts them side by side, lust and tensions run high. He wants her and he knows she wants him.

Can he keep his feelings on a shelf long enough to keep her safe while he dethrones his drug lord brother, or will temptation overwhelm good sense and put them both on a path to destruction?

Cuff Me:
When Lynette Montgomery’s older sister dies from breast cancer, she quickly steps in to take care of her two young nephews. The boys are sweet, caring, and Lynette has no idea what she’s doing. Terrified of failing her sister, she does everything she can to present herself as the parental figure she feels the boys need, even swearing off the sexy-as-can-be cop she just so happened to have a one-night stand with outside of her best friend’s house.

Robert Barletta is a decorated and respected cop with the San Antonio PD. After having just played a key role in bringing down Houston and San Antonio’s largest drug operation, he should be on top of the world. Unfortunately for him, he can’t get that one night with a smoking hot blonde temptress out of his head.

When he’s forced to take some time off, and the two come face to face, will they be able to keep their attraction on the back burner? Or has this game of cat and mouse just started?

In the Shadows:
Rosie Hobbs is in trouble. Big trouble. The kind of trouble that has her scared to leave her apartment. When she first met Aaron he was a fun guy who liked to have a good time. Just the kind of man she prefers. But when he wants more, and she tells him she’s not interested, he loses it. Continuous phone calls, showing up where she’s at, vandalizing her property… She finds herself turning to an unexpected protector, her best friend’s ridiculously sexy brother.

Conner Montgomery is a lawyer and he deals with this type of BS every day. However, something about Rosie has him crossing the professional line. Is it her gorgeous smile? Her charm? Or the fact that he can’t even look at her without imagining her body wrapped around his? Whatever the case, when Aaron shows up at a get-together and scares Rosie half to death, Conner’s determined to make sure he can’t get anywhere near her again.

When the stakes get higher, and the threats more real, will Conner be able to keep Rosie protected, or will their soaring passion cloud their judgment?