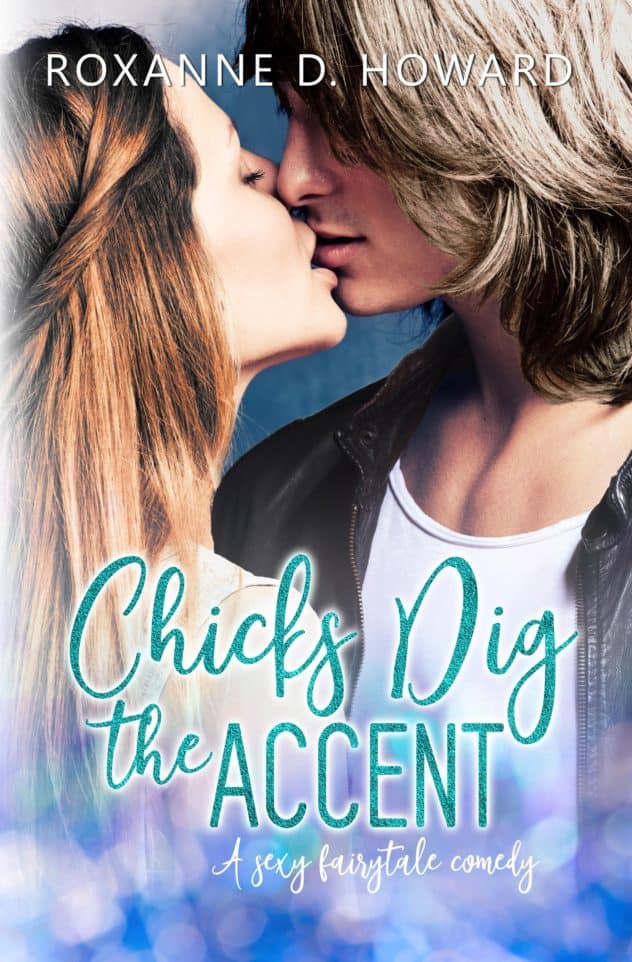 Molly Ivers has always known she’d marry a foreign man with a delicious accent. Six months ago, in a night of unbridled passion, Molly gave her virginity to her friend and sexy-as-can-be neighbor, rocker Evan Castle. Unfortunately, thanks to his swarm of constant groupies, things didn’t work out, but they remained friends. Now, after having just broken up with her boring, run-of-the-mill right-wing boyfriend, she’s on the verge of finishing her graduate degree and moving to Paris. She is desperate to shake things up–and find that sexy foreign man.

She’s had a crush on Nicholas Sullivan, her British professor, for as long as she can remember. So when opportunity comes knocking to spice up her appearance in the form of a French life coach, she hires Jean Luc Dubois to help her let her hair down and become more Parisian and hip to reflect the person she is within. Thanks to Jean Luc’s magic, she starts to catch her hunky English prof’s eye, but the more time she spends with Evan, the more she begins to realize that her Prince Charming might just be the one she’s known all along. 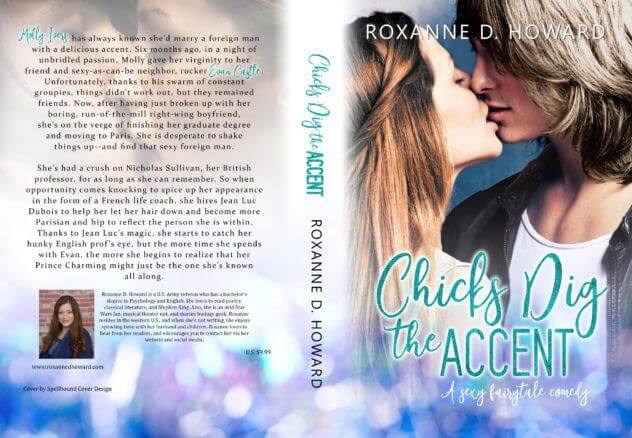 “So, you’re going through with it?”

“Going through with what?” They both looked into the living room, where a bemused Evan stood half-naked and barefoot in a pair of black pajama bottoms. Molly licked nectar off the peach on the end of her fork to save it from dropping to the floor. Evan’s jaw tightened, and his eyes gleamed as he zeroed in on her. He cleared his throat and lifted an empty half gallon of milk. “Sorry, you left the door cracked open. I came to borrow milk.”

“Jesus, Evan! Knock next time, or at least text. I’m in my panties!” Nell smacked him on the arm and tugged down her nightshirt as she ran past him into her bedroom.

“Sorry,” he said, but he seemed distracted as he strode toward Molly, eyes glued to her lips. She sucked the rest of her peach slice into her mouth and wiped at a little of the nectar at the corner of her lips. Her cheeks blazed at the hungry longing in his eyes. She turned away to open the fridge to get the milk. It wasn’t uncommon for them to borrow food from one another, and he always watched out for them. He had a comforting, protective nature she’d gotten used to.

She grew painfully aware of her night shorts, which had a tendency to ride up her butt and cut off at midthigh, and her thin white tank top. Could he see her nipples? And jeez, Louise, why did they have to harden every time he came near her?

She pushed hair out of her face and began to pour the milk into his empty half gallon. “Help yourself to the fruit in the bowl there. Nell had leftovers. How much milk do you want?”

“Enough for a bowl of cereal, please. I’ll get some at the store later.” She’d only heard his voice drop as low and husky during sex. She stopped after she poured enough milk, then gave him extra.

Evan reached over her to open a nearby drawer. He took out a fork. He inserted it into the flesh of a peach slice and brought it to his lips.

He teased the fruit around his lips with a wicked smirk. He winked at her and sank his teeth into half the peach as he watched her, licking it. Her mouth went dry. Oh, he knew what he was doing. He chewed, licked his bottom lip, and held out the fork.

Before she could gain common sense and say no, she closed her eyes and parted her lips. He slid the remaining slice in. Molly closed her mouth around it. He withdrew the fork tines slowly from her closed lips, and his finger grazed her lower lip.

She opened her eyes and sharply inhaled. He’d moved closer, right there, and was about to kiss her. She turned away, burning. 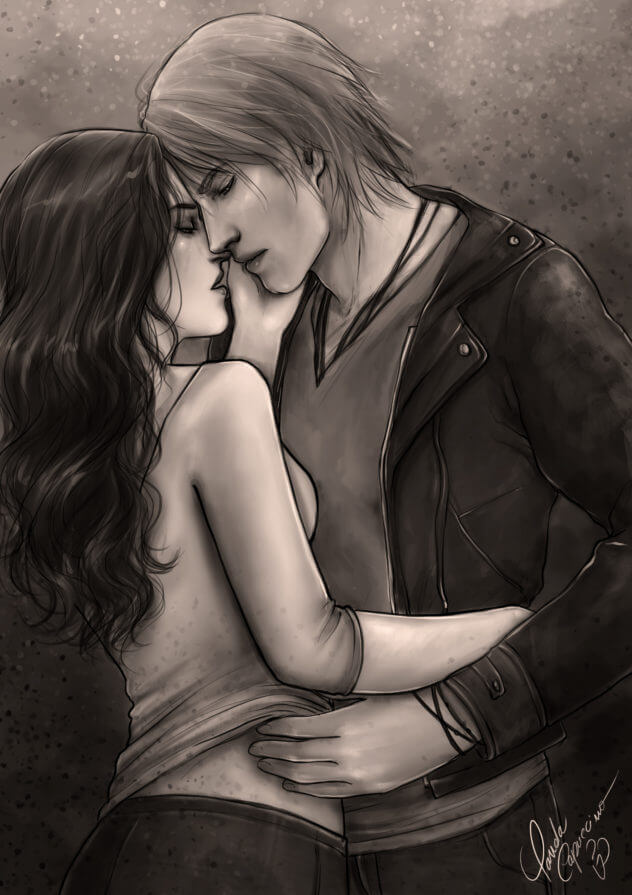 “You know”—he fingered a wayward strand of hair near her face—“we haven’t been alone together since…that night. Funny the way it comes back around, hmm? So, what were you and Grouchy McGee talking about a minute ago? What are you going through with?”

“Nothing. Just this new thing I may or may not try. It’s a sort of…makeover.”

He tilted his head and scanned her face. “Why do you need a makeover? You’re perfect as you are.”

She blushed and got busy with the batter. He’d continually shown an interest, no matter how study-obsessed or sleep-ridden she looked. She pretended it didn’t make a difference, but it more than flattered her; it made her feel special, desired. Once she’d stirred the batter enough, she put it in the pan to cook and found her gaze locked on his chest. Did he put on more muscle since they’d had sex? Or had it been too long since she’d seen him without his shirt? If she reached out, without too much effort, she’d touch him. She fought the urge, and he cracked a smile at her obvious dilemma.

She turned back to stir the eggs and kept her eyes averted and hands busy. “I-I don’t know. I’m going to try a new look. You know, to get ready to go to Paris.”

“Mmm-hmm.” He moved into her peripheral vision. His lips came right behind her ear, and his nose nudged her hair. She tensed.

“I’ve got to tell you, Molly, what happened between us…”

His warm hand slid around front, below her tank top. His fingers grazed her bare stomach, skin to skin. He waited, gauging her reaction.

She almost shook her head, but she wanted his touch! She hadn’t gone without sex since being with him, but her body sang at the heat of his palm, and she realized she was starved for him, for what he and he alone could give her. She gave a barely there nod, and he continued to caress her stomach.

“What happened was… I don’t know what to call it. Amazing, sacred. We’ve kept it between you and me, but if you need someone—”

She gasped as his hand dived into her shorts and he slid his fingers over her clit, between her pussy lips. His fingers slowly made their way back up. He thumbed her sensitive nub, and she closed her eyes and tried to breathe.

“I’m here if you, you know, feel the need. No strings attached. I’ve had my eye on you for a long time now. But I have a feeling you already knew that.”

His voice dropped to a low and sexy growl. He moved his hand farther down, and she leaned her head back onto his shoulder as he thrust two fingers inside. He continued to stimulate her engorged clit while he steadily pumped in and out of her. She let out a small whimper, and his lips moved against her ear.

“Shh. Our little secret, right? I have a secret of my own. I can’t stop thinking about you. What you gave me, what we did together—do you think of me too? Hmm?” 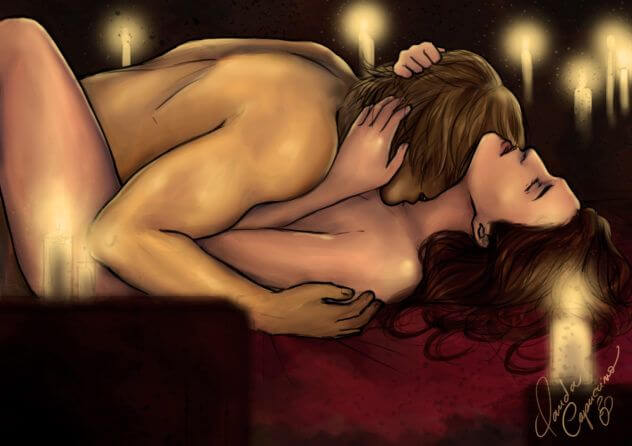