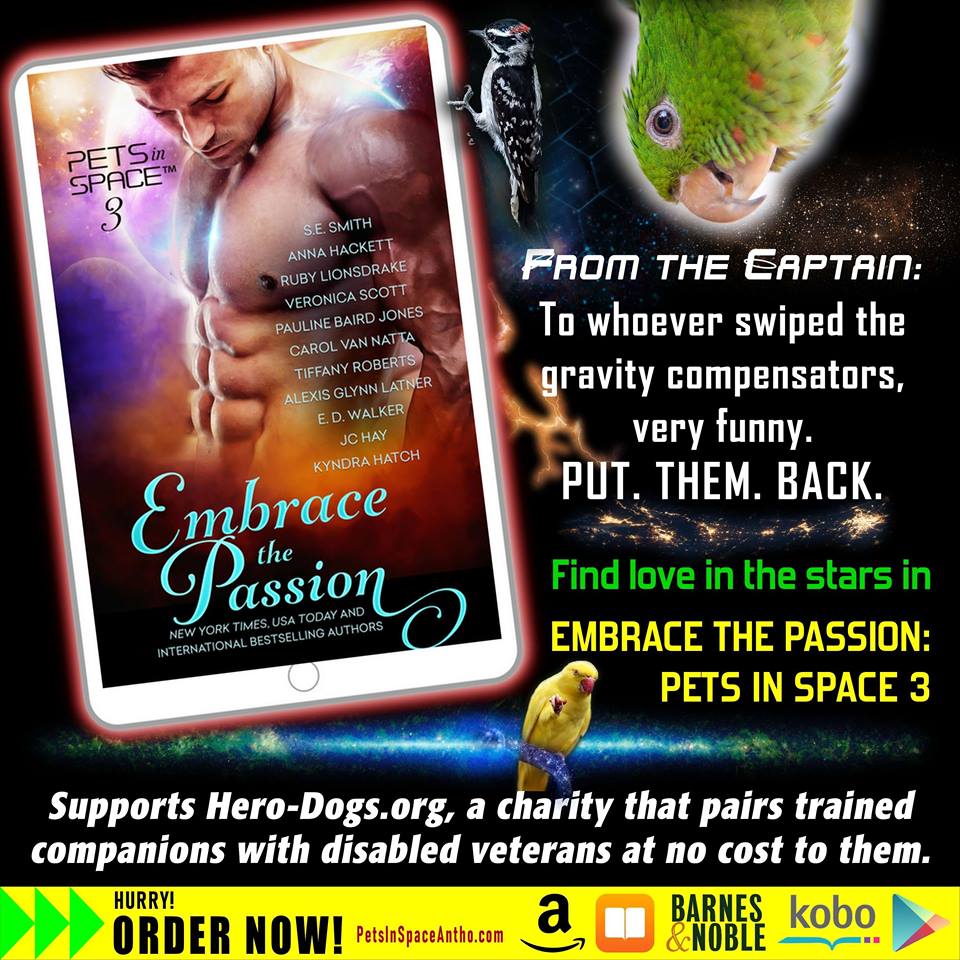 Bring on the Pets In Space

Tomorrow sees the release of Embrace the Passion: Pets in Space 3, and I couldn’t be more excited. I’ve loved reading the previous two editions, and being invited to contribute to this year’s anthology had me literally jumping for joy around my office. Not just because I’d be writing alongside some of the luminaries in the genre (and seriously, the contributor’s list looks like my bookshelf – Ruby Lionsdrake? Veronica Scott? Anna Hackett? Tiffany Roberts?), but because it gave me a chance to be part of raising money for a great cause.

If you haven’t heard, Pets In Space donates a portion of its proceeds to Hero-Dogs.org – an organization that org improves the quality of life for veterans and first responders by raising, training, and placing service dogs and other highly skilled canines, free of charge, and then provides lifetime support of those partnerships. It’s a group I feel is doing really important work, and I’m thrilled to be part of an effort that has already raised more the $4,400 for them.

After the invite came the inevitable shock of nerves – the sense of needing to bring my A Game if I was going to be part of something so big. Picking the story was easy though – I knew I’d wanted to do a story about the commander from my TriSystems: Rangers books, and given that series’ focus on soldiers empathically bonded to their wolf partners, this anthology seemed like a perfect opportunity. My grieving, haunted CO needed someone vibrant to pull him out of his shell, and I found the perfect pair in the veterinarian Nafisi, and the wolf pup JJ. The two of them will cajole, push, and eventually drag Rafe toward his happily ever after, though as today’s excerpt shows, she’s not always happy about it:

Shadow of the Past – exclusively in Embrace the Passion: Pets in Space™ 3

Commander Rafe Penzak is tired of jockeying a desk. With only months left before his forced retirement from the rangers, he decides to bend a few rules for one last mission: follow up on intelligence that vicious criminals have found the ranch that supplies the rangers’ umbra wolves. He’s ready to confront the reminder of his wolf’s death, but nothing in the Three Systems could prepare him for the spitfire who runs the farm.

Veterinarian Nafisi Sultana has run her wolf breeding program her way since the death of her husband. The last thing she wants is another ranger taking up space, correcting her methods, or being underfoot. But she can’t miss the pain and sorrow that haunts the greying commander, and her need to heal others pulls her into his orbit despite the agonizing memories he wakes in her.

With storms, raiders, and a renegade wolf pup driving them together, Nafisi and Rafe have to set aside their damaged past, or they’ll never be able to save something they both want more—a future.

Before Rafe could get any more maudlin, he followed Nafisi into the living room. She had stripped out of her survival gear, the plas-rifle leaning against the wall as she hung the heavy coat and pants in the closet. Underneath she wore simple, utilitarian clothes, and for an unvarnished second, he let his gaze skim over her.

She was about his age, maybe slightly younger, but he knew more than most what time and tragedy could do in tandem. She had a mature build to match—heavy in the hip and bust, just the way he liked. Or would have liked if he were capable of such a thing. Her shoulder-length hair had probably once been blue-black in its intensity, a perfect match for the raw umber of her complexion, but the years had leached some of the color away and left visible streaks of white.

If she noticed him staring, she gave no indication. “You can stand there if you want, but I’m not pretending like you’re a welcome guest. I’ve got shit to do, and I’m not going to change my schedule to accommodate you.” She pointed first toward the back of the room and then toward a hallway. “Kitchen’s there, and the bathroom’s down there. I’d say make yourself at home, but please don’t.”

Embrace the Passion: Pets in Space™ 3