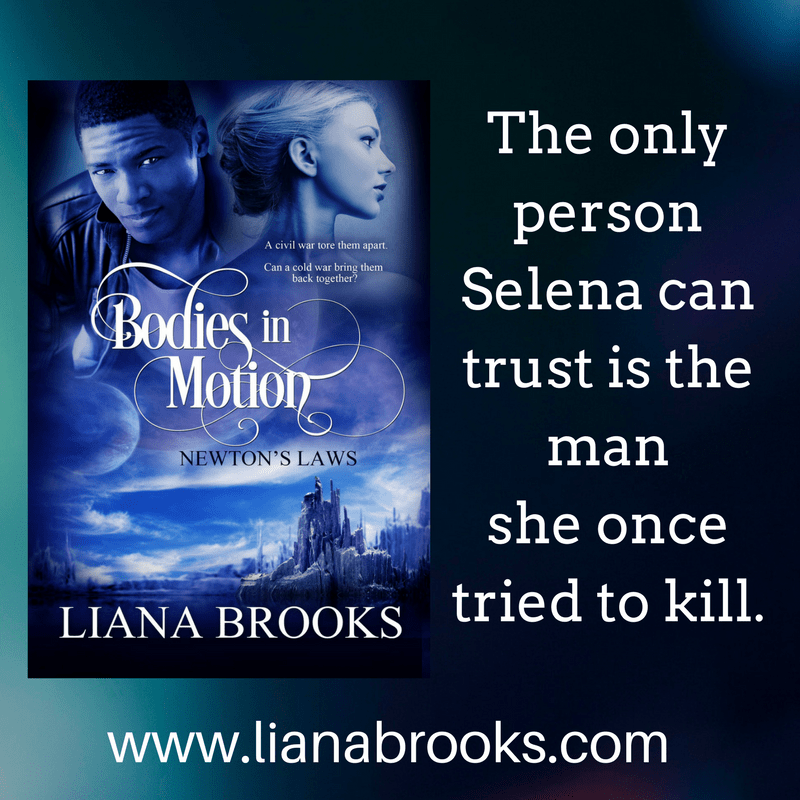 Newton’s First Law of Motion states “A body in motion will stay in motion until acted on by an outside force”. We usually think of this in terms of physics, physical objects, and friction but it applies to choices and lives too. Often a person will set their course and stay on it unless acted on by something external force, even if the destination is catastrophic. For Selena Caryll her course is a downward spiral, she’s lost everything and has no future to look forward to. For Titan Sciarra his life was headed for an early death until he was shot down in the war, the subsequent injuries and his absence from the battle lines allowed him to change direction.

In a world where two stagnant cultures are on a collision course with mutual destruction it will take something extraordinary to change the world. And what’s more extraordinary than love? 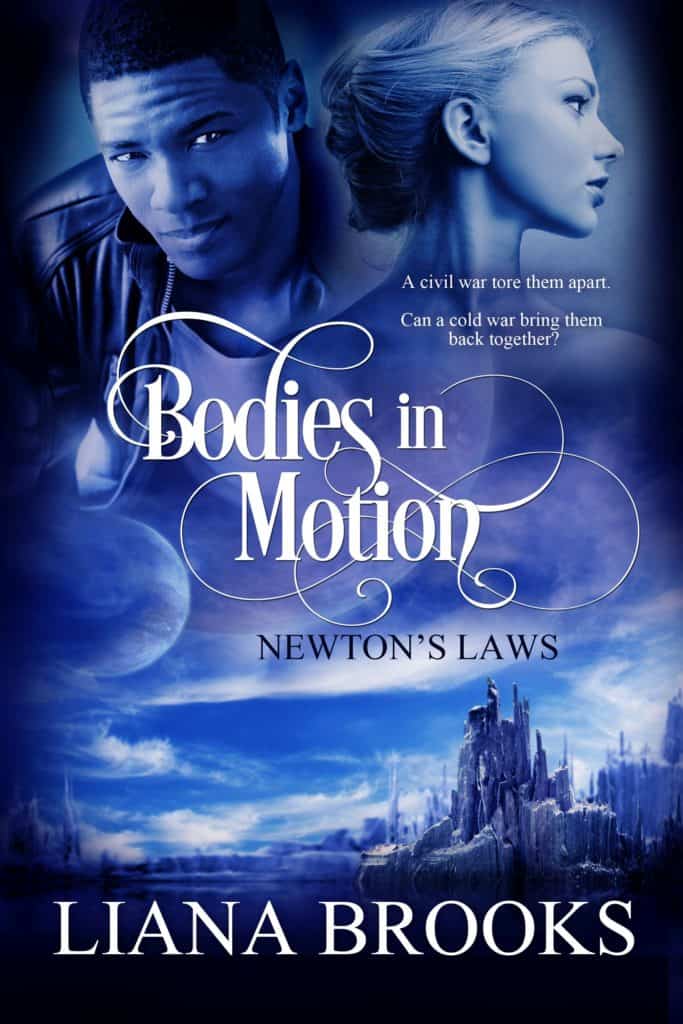 Bodies in Motion
A civil war tore them apart. Can a cold war bring them back together.

Selena Caryll lost everything in the war: her ship, her crew, her family. The only thing keeping her going is the hope that somehow the feuding, ground-bound settlers and the fuelless space fleet can set aside their differences. But getting the politically-fractured fleet moving again is more than she can manage alone. For now, she has to settle for working undercover with the planetary police force.

When someone tries to reignite conflict between the planet-siders and the fleet, there’s only one person who has the rank and ability to help Selena protect the fleet: Titan Sciarra, Fleet Guardian—the one man she’s tried hardest to avoid since the war destroyed her life.

In a world where the stagnant weight of tradition can be as deadly as any knife, the only way to survive is to keep moving. 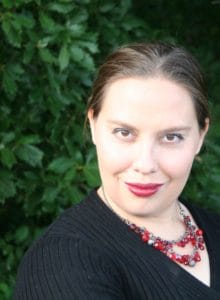 Liana Brooks write sci-fi and crime fiction for people who like happy endings. She believes in time travel to the future, even if it takes a good book and all night to get there. When she isn’t writing, Liana hikes the mountains of Washington with her family and giant dog. Find her at LianaBrooks.com or on Twitter as @LianaBrooks

Newsletter (includes a free download of Even Villains Fall In Love) https://tinyurl.com/yanjbog8 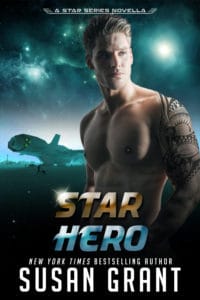 First he had to rescue her. Then he’d try to win her back.

Space Marine Lieutenant Lukas Frank has a lot in common with a street dog named Bang-Bang; they both started off as scrappy orphans fighting to survive—and beat the odds. Things change when Bang-Bang leads Lukas to starpilot Captain Carlynn Riga. The tough war hero learns what it means to surrender—his heart. Lukas’s struggles with Post Traumatic Stress Disorder, PTSD, threaten to tear the three of them apart, but nothing tests them more than when Carlynn goes missing on a mission. Now the rugged, emotionally scarred Marine and his K-9 partner must find Carlynn and bring her home, or risk losing everything he has finally found worth fighting for.

(a stand-alone novella in the Star Series, expanded from the novella Stray, originally published in the Pets in Space 1 Anthology)

“Wow!!!! I downloaded the book and started reading, I couldn’t stop…. I finished the book in one day” —Goodreads

“I haven’t been so absorbed in a book, the characters, and plot in a long time. I love this book!” –Amazon

“I have never read anything by this author before and I have been missing out. What a wonderful story that kept me reading right to the end. It grips you from the first words” –Goodreads

“This is a sweet tear-jerker involving an alien “street dog” and two lovers dealing with PTSD. It may have an alien setting, but it’s very relevant to many couples in the US today. Susan has a great imagination, and you will enjoy her alien world-building. So don’t deny yourself this treat…..just make sure you grab the tissues!” –Goodreads

“Sparks fly when Lucas, the Marine hero, meets Carlynn, the star pilot. A few months later different sparks fly and Lucas learns what it’s like to lose everything he always wanted. Can he find Carlynn and win her back?” –Goodreads

“I am once again spell-bound by Susan’s thoughtful literary approach of bringing into play Bang-Bang to examine the risks associated with an unfolding love story and the way our past history opens as well as cloaks the heart to direct our present and future.” –Goodreads

“Beyond the romance it dealt with the very real issue of PTSD really well, covering not only the person who has it but how it can effect those who love and care for them. I absolutely adored Bang Bang and cant wait to read Puppy’s story.” –Goodreads 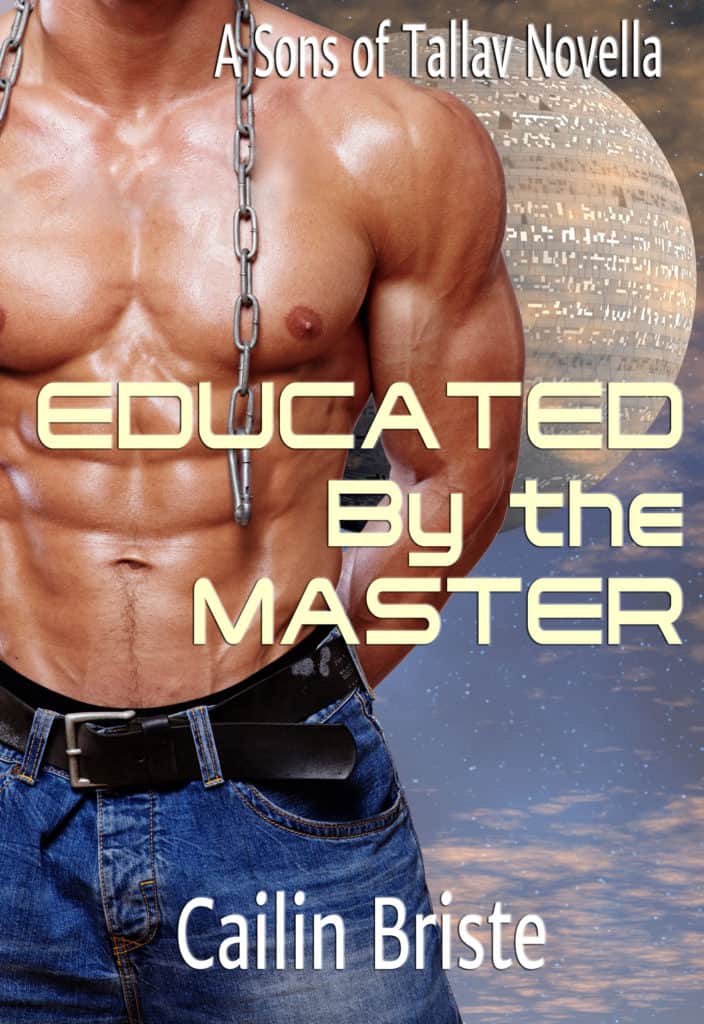 Here’s a taste of Trey and Patsy’s first meeting.

“Standard it is then. We have somethin’ in common. I’m proper Irish. Erin go Bragh. ‘Tis a pity ya don’t speak Gaelic. I don’t get to speak it this far from home. Oh, goodness. We need to head over to the gate. Our shuttle will be boardin’ soon.”