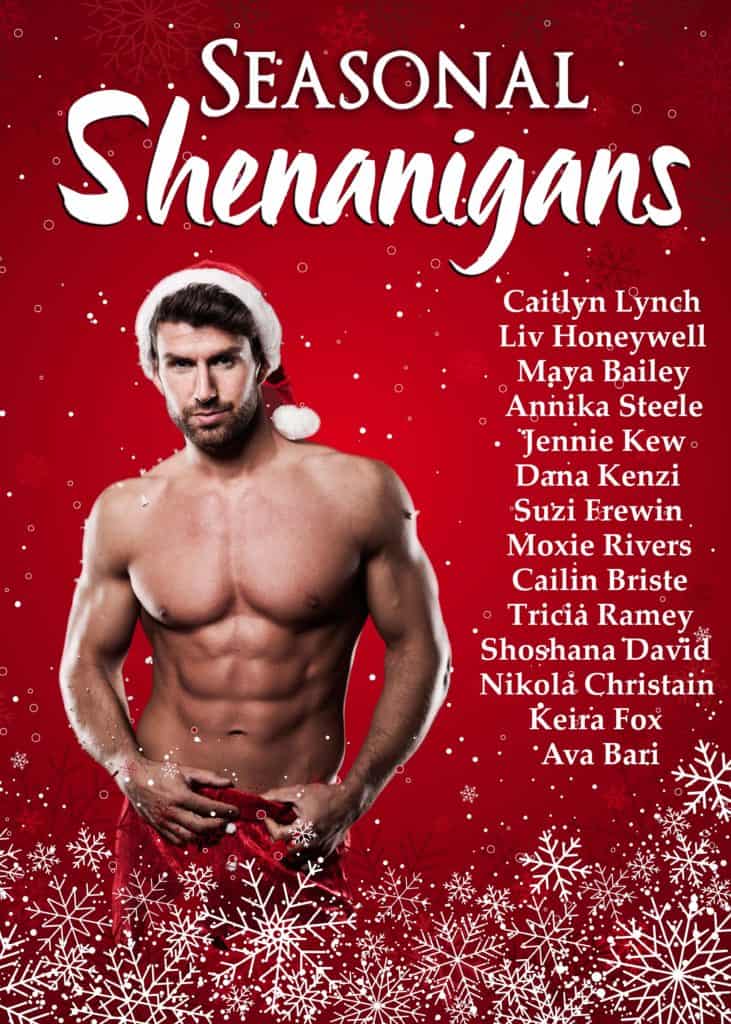 Seasonal Shenanigans releases December 7. It’s currently on pre-order for 99 cents and will remain at that price for the first week. Get you copy right away before the price increases to $4.99. My story in the anthology, A Grease Monkey Christmas is all about two strangers who meet at a spaceport and share Christmas. Cinderella meets her handsome prince but doesn’t go to a ball or lose her shoe.

I’m posting an excerpt from A Grease Monkey Christmas, but first a little about each story in the anthology

Let It Snow – Nikola Christain
Jovie has always avoided the Christmas season. But when she has to spend the holidays in a ski lodge, she meets someone who may inspire her to embrace the season. Or at least the part about meeting under the mistletoe.

Eight Secret Nights – Shoshana David
Someone’s been leaving Hanukkah presents on Mara’s doorstep. Sweet presents. Thoughtful presents. She wonders who her secret admirer is. Hopefully it’s the cute guy who moved in next door and not the creep from 7A.

A Tradition Worth Continuing – Tricia Ramey
It’s Christmas Eve, and Beth Murphy is finally able to relax. Now’s the time to enjoy a little downtime with her husband James before the chaos of their descending families the next day. But it’s the gift she has for her husband that will make this Christmas the most memorable one yet.

Kittens For Christmas – Caitlyn Lynch
Regina Brooks thinks finding a box of abandoned kittens on Christmas Eve is a disaster in the making. Fortunately, her hunky neighbor Ric is eager to help her out — in any way he can!

Missing You For Christmas – Moxie Rivers
When Allison’s husband, Jake, can’t get leave, it’ll be her first Christmas without him since they were married. But Allison isn’t the type of person to let that stop her, but with the help of her coworkers, and just maybe a little Christmas magic, it will still be a Merry Christmas.

A Grease Monkey Christmas – Cailin Briste
Fate arranges the chance meeting of two strangers in need of a little kindness on Christmas Eve. Celebrity Davon Weider, with his navy-blue eyes and muscular physique, can fill the starring role in any woman’s fantasy. But Jasline, a spaceport mech, is more impressed by his five jump speed records.

Santa Claus is Coming – Jennie Kew
I don’t dress up as Santa for just anyone, you know? Holly Granville isn’t just anyone. When a massive storm hits our Christmas photo shoot and we’re trapped inside a tiny hut — cold, wet, angry, and naked — our friendship irrevocably changes. But will it be for better, or worse?

The Promise Of Love – Maya Bailey
The year is 1819. He sees a man across a room and it is like seeing himself dressed in a British soldier’s uniform. How could it be that another man bears his face? He had loved her once; she had betrayed that love. Now he must find answers. If only he could do that without laying eyes on her again.

Underneath The Mistletoe – Ava Bari
Police officer Nic Zanetti just wanted to spent a quiet holiday alone with his TV. Then he’s called to find a runaway little girl. When he meets her widowed mother, this Christmas will be one they never forget.

Blizzard – Suzi Frewin
Simon and Fallon find themselves marooned together, fearing for their lives against the Zengwee, an alien species which has dominated Earth for its resources. Neither want the complication of falling in love, but fate and Christmas have other plans.

All I Want for Christmas … is You – Annika Steele
On Christmas Eve, Dr. Victoria Long is determined to take her relationship with Detective Devon King to the next level, maybe even the forever kind. But will their relationship survive when Devon discovers she’s a suspect in a series of thefts?

Christmas is Coming – Liv Honeywell
It’s almost Christmas, and Abby decides to decorate the tree, despite Will, her Dom, telling her to wait. But when she drops his toolbox and all the parts scatter like confetti, she’s left wondering if she’ll be able to sit down by *next* Christmas. What will happen when Will gets home?

New Beginnings – Dana Kenzi
When Erika’s Winter Solstice ritual doesn’t go as planned, it joins her list of worries, right next to her struggles to run her newly acquired business. Then her handsome neighbor, David, drops by to offer her some company. What starts off as a venting session between two frustrated adults leads to a cathartic and pleasurable encounter.

I Fell Through Starlight For You – Keira Fox
It’s the earliest hours of Christmas and Lucille is thinking of closing up her bistro when an enchanting figure comes through her door seeking aid for his injuries.

Excerpt from A Grease Monkey Christmas by Cailin Briste