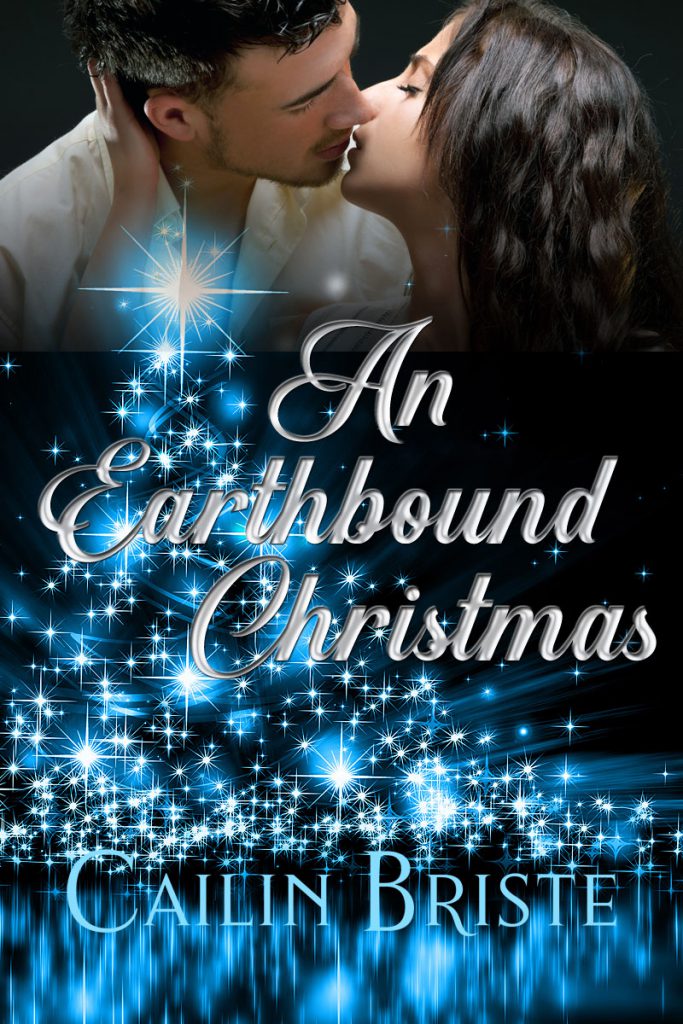 Fate arranges the chance meeting of two strangers in need of a little kindness on Christmas Eve. Celebrity Davon Weider, with his navy-blue eyes and muscular physique, can fill the starring role in any woman’s fantasy. But Jasline, a spaceport mech, is more impressed by his five jump speed records. This will be a Christmas neither will forget.

Jasline wiped a blob of viscous goop from her cheek. The stink of XD-800 filled her nostrils. At least none landed in her hair… this time. She knew only too well how devilishly difficult it was to remove the lubricant from her thick golden-brown curls. She’d taken the precaution to tie every strand back and secure the ponytail beneath a cap before attempting to free the injectors on the jammed cargo lift. Success had come at the cost of one of her nicer navy-blue jumpsuits. Nicer being relative and dependent on the number of stains layered one upon the other on the durable canvas garment. Maybe with some Brite-N-Clean, she could get the worst of the ugly, dark, sludgy brown out.

She pressed her hands against her lower back and stretched her spine before bending over to pile her tools into her redi-kit. It seemed she’d have extra free time this Christmas Eve. The boss had said she could quit as soon as she got the cargo lift functioning. Medical supplies needed for the plague on Benis Prime were waiting to be loaded, and the stevedores went straight to work once she cleared the maintenance hold. They’d want to get done and head home to spend Christmas Eve and Christmas Day with their families.

The past two Christmases, she’d signed up for on-call status and stayed at the spaceport. This year it was time to pull her head out of the sand and stop avoiding the holiday. After all, it couldn't be lonelier at home than it had been hanging out with the misfits and losers at the deserted spaceport with its fake winter snow scenes. Christmas dinner was waiting to be picked up at the local grocery store, Pack-It-In. Three bottles of wine were in her parents’ wine chiller, and a bottle of top quality vodka was in the freezer. This Christmas, she would eat and drink herself happy.

Silence met her ears instead of the usual bang of metal doors and the clamor of conversation when she entered the employee locker room. No waiting for a shower. The door of her locker popped open once she’d placed her finger on the security tab. She slung her redi-kit onto the top shelf and pulled her laundry bag out of the bottom. After pulling off her boots and unbuckling her belt, she yanked at the collar of her coverall, releasing the sticktites that kept it sealed all the way to her crotch. She shrugged out of the arms and pulled each leg out of the rank garment, careful to avoid getting any more XD-800 on her skin. With her gear stashed, she secured the door.

Gray towels, once white, lay in a double pile on a table by the shower entrance. Jasline selected the largest and fluffiest of the lot, slung it on the hook outside the first shower cubicle, and turned the water on, waiting until it was nearly scalding hot before stepping inside. A jab on the soap dispenser produced one drop. Dang it. She’d have to use shampoo or switch to another stall. Shampoo it is.

Palm filled with a generous squirt, she slathered her body, skimming her breasts and scrubbing between her legs. Not that it mattered. She hadn’t been with a man in…eighteen months. That time had been a disaster. The cretin she’d met in a blue-collar bar had taken her outside to the alley, fucked her against the wall, and left her with a Thanks, babe right after.

Water slipped into her nose when she snorted at her maudlin thoughts. As long as she remained a grease monkey, her chances of attracting a decent male were near zero. She’d overheard her neighbor trying to set her up with a friend. Amazingly the man hadn’t jumped at the chance to go out on a date with a woman described as sturdy, decent, and a good conversationalist. That last had been a kindly-meant fabrication. She wasn’t a talker. Something would have to change, but it wasn’t likely that it would be her.

Bent over, she twisted the excess water from her hair, watching it run down the drain. She rubbed her hair dry quickly because the locker room was never warm enough. Goosebumps covered her, and by the time she wrapped the towel around herself, her nipples budded tight. She pulled on the clothes she’d worn to work earlier in the day, including a bright red tunic, meant to put her in the Christmas spirit. She let her golden-brown curls fall to her shoulders rather than attempting to restrain them.

Her father had called her hair her glory. It was the one semi-perfect thing about her. The color matched the California-girl tan she earned baking in the sun. Her inner cat found it hard to resist a patch of sunshine. The stain on her cheek marred the effect, but it did sort of match the green eyes staring back at her from the mirror on the inside of her locker. She scowled at herself. Christmas was making her foolish.

She shouldered the laundry bag and slapped the locker closed. A gang of stevedores jostled their way past her, all smiles, laughter, and rude jests. That was quick. But it looked like the whole crew had stayed to support the two the job required, assuring everyone an early end to their day. They had families to rush home to.

At least this concourse wasn’t overrun with the chaos of the large liners heading off with thousands of passengers for the Christmas in Orbit cruises which had become popular over the last few years. Small private ships berthed here, like the medical ship she’d been working on. It was quiet save for a tall, dark-headed man shouting into the hand-held comm pressed tight to his ear.

“I’m coming over.” His fingers fisted, and his face darkened.

It was Davon Weider. The sexiest jump pilot, well, anywhere.

“I’ll fight you on this. You won’t stop me—” He pulled the hand-held away and glared at it. “Shite!” Then he threw the communicator along the concourse, leaned his long athletic body against the wall, and slid to slump on the floor, head resting on the arm on his bent knee.

Jasline bit her lip. This was Davon Weider, the military hero who had broken the jump speed record five times and had movies made from his exploits. The man was golden. Everything he touched went platinum. Even his shit probably smelled like roses. The playboy of every girl’s fantasies, he’d broken thousands of hearts when he’d finally settled down with the perfect woman, Tanya Thoreau. Supermodel-good-looking, rich, and with the acting chops to win an Academy Award. Her star shone as bright as Davon’s.

So why did he look like life had just dumped a crushing load of defeat on him? And why should she care?

Her stride slowed. No, I shouldn’t interfere. He has people for this. The instant she decided to walk past him, he raised his head, looking straight at her. Hurt and anger shone from the depths of his dark blue eyes, overlaid by a sadness that seemed to cling to every cell in his body.

She stopped dead in her tracks. Pain thudded in the place in her heart where she nurtured her own hurt, betrayal, and isolation. And she couldn’t walk past him. Instead she slid to sit beside him, palms resting on her bent knees and…nothing. No words came. She stared straight ahead, doing the only thing she knew to do, sharing this moment with him, showing him he wasn’t alone.