Available on #Kindle, #Nook, and other #eBook sellers. 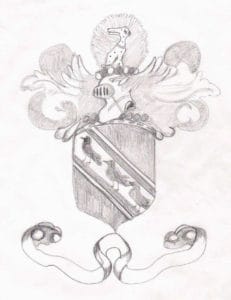 Randolph Meryon, sadist and owner of the Whip Hand on Beta Tau was born and raised on Tallav. He even tried his hand at being a Marshal of Tallav, but it didn’t work out. I’ve spent most of the week researching Irish medieval weapons, armor, and family coat’s of arms. I selected Randolph’s surname long before I began writing his book. So I wasn’t sure I could make Meryon fit into Irish ancestry. I managed it. And the means I used actually fits into the whole faux Irish thing that the founding mothers of Tallav established as the planet’s identity.

The Meryon’s of Tallav took on the Fitzwilliam coat of arms. William FitzWilliam, 3rd Viscount FitzWilliam ” was born at Merrion Castle, in present day Mount Merrion, Dublin, youngest son of Thomas FitzWilliam, 1st Viscount FitzWilliam and Margaret Plunkett, daughter of Oliver Plunkett, 4th Baron Louth.[1] The FitzWilliam family are recorded in Ireland from about 1210 and by the seventeenth century had become among the largest landowners in Dublin. They had a record of loyalty to the English Crown, and the viscountcy was conferred in 1629 by Charles I in recognition of their services.” (Wikipedia)

There are some Meryons in Ireland but they seem to have come there from France. The Irish name that is closest is O’ Mearain, but I couldn’t find a coat of arms that satisfied me with that surname. But I did find something else. I’ll share that in a future post.

I’ll also explain the family coat of arms image I’ve added to this post in my next one. This drawing was made by Denis Dowdall, an Irish genealogist.