1
Sexy on the Run for My Sexy Saturday #MySexySaturday #MSS152 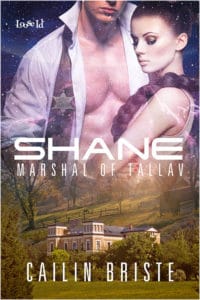 #MySexySaturday This is my first time to join the My Sexy Saturday blog hop. The theme for week #152 is Sexy on the Run.

I’m highlighting a scene from Shane: Marshal of Tallav.

I’ve chosen a seven paragraph excerpt in which Adrianna first meets Shane. She’s just fended off an attempted kidnapping by running to where she is meeting the marshal, grabbing an ice chipper, and waving at the humongous bad guy. With a marshal on the scene, the bad guy makes his escape.

Oh shit. A darted glance informed her the marshal was standing, arms folded over his chest, waiting for her. The desire to run washed through her. She filled her lungs with a deep breath and resisted the impulse, resolutely walking toward him, opting to keep her eyes lowered. When his boots came in sight, she slowly lifted her gaze, soaking in the details of the man planted like a mountain in front of her. Her initial impression of well-muscled male was confirmed. More than confirmed. What she saw below his belt… Mmm, some things just couldn’t be tucked away and hidden. She felt her cheeks heating and continued her upward perusal. When her inspection reached his face, she met the brightest pair of blue eyes she had ever seen. Unable to put one rational thought behind another, she blinked and succumbed to drowning in fathomless azure pools until they filled her entire vision.

She blinked. The blue eyes have a voice? “Y-yes. Just a bit shaken. My wrist is a little sore.” She wiggled it, puzzled.

“You must be Adrianna Pacquin.”

“Hmmm. Well, I don’t think we should continue this conversation here,” he said with a meaningful glance over her shoulder. The bar patrons were still watching them with interest. “Follow me.”

The marshal spun toward the exit. “Don’t forget your credit chip.”